Old theories cannot explain all things which are possible

One of our recent scientific articles “Mendel was true scientist, not Darwin!” written by our author Babu G. Ranganathan caused a lot of feedbacks from our readers. The following is one of them which we think is the most interesting. It is written by Mark H., New Jersey, USA. 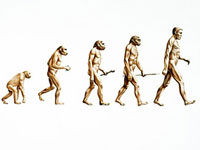 Old theories cannot explain all things which are possible

I am an amateur student of science and scientific history. In my opinion, Babu G. Ranganathan's article, "Mendel was true scientist, not Darwin!", makes some confused interpretations of scientific ideas and history. I hope I can add some clarity.

I think it is closer to truth to say, that Mendel studied variation within biological kinds. His experiments were within species, or with hybrids of closely related species. Darwin (and Wallace) published their ideas about evolution a few years after Mendel began his researches. I am aware of no evidence that Mendel intended to study evolution, or that he connected his work with evolutionary concepts, or that he was looking for inherited connections between very different forms of life.

Accordingly, it is reasonable to consider that Mendel did not show the possibility of variations across biological kinds ... because he was not looking for them!

As a good experimental scientist, Mendel learned from nature by direct observation. With the species he was studying, the scope of his observations on heredity covered small numbers of generations.

I understand that among people who believe as Mr. Ranganathan does about the origin of species, many also believe that Earth is less than 100 centuries old -- but to the great majority of geologists, who believe that Earth is many millions of centuries old, and to the great majority of biologists, the evolution of new species is understood to take place over a span of many thousands, millions, or even billions of generations.

If you spent one day of your life carefully studying as many trees as you could (in one day!), how much do you think you would you learn about how trees grow from a seed to dozens of meters in height? When Mendel studied short-term variation, he was not trying to study evolution -- and even if he had wanted to, his short-term observations could show only a little, about what can happen over huge stretches of time.

In modern terms, we can say that Mendel studied, and through his genius was able to gain important understanding, of patterns of inheritance that result from sexual combination of genes. You can study this on a short time scale, because it happens with every specimen, in every generation. Just think of how different children are, from their parents, brothers, and sisters! Missing from Mendel's understanding was the phenomenon of modification of genes by random alteration of DNA, and other rare accidents. This is not to criticise Mendel -- he would have little chance of learning enough to make a theory of mutation, from the short-term data he carefully collected.

To make Ranganathan's statement closer to scientific knowledge, Mendel showed that there are natural limits to the most common kind of biological variation. But Raganathan's article implies that these are absolute limits on every possible cause of natural variation. There is very strong and clear science, showing that this is not true!

When Ranganathan writes that it would be quite difficult to support Darwin's ideas of the origin of species, using a purely Mendelian theory of genetic variation, his reasoning is valid. But in scientific history, Mendel's discoveries were a brilliant and wonderfully useful beginning of genetic theory. Genetics has advanced very, very far since Mendel's time, and the modern theory of genetics supports Darwin's ideas very well.

To get a good picture of Ranganathan's mistake, suppose someone said, "our concept of the solar system is wrong, because these planetary motions cannot be explained by Galileo's physics!" Or, "airplanes cannot fly, because Newton's theory of fluids predicts very high drag!"

If we hadn't learned anything new since Galileo or Newton, these statements would be sensible. If we hadn't learned anything about genetics since Mendel, Ranganathan's argument would make a real challenge to evolutionary theory. But because thousands of scientists around the world keep asking questions about Nature, and the most of them communicate their findings openly and honestly, our knowledge of Nature keeps growing -- and we can understand that things are possible, that could not be explained by our great-grandfather's theories.

In Mendel's day, people still crossed the oceans in sailing ships, and the fastest way to travel on land was in a train pulled by a steam-driven locomotive. Mothers still died from needless infections, because doctors delivering babies did not believe that they should wash their hands. I am very grateful, that the world has learned better. Does anyone, while drinking their cup of tea, believe that a nuclear power plant (that perhaps provided electricity to to heat the water) cannot work, because no scientist of the 1800s had a theory for nuclear chain reactions?