Fish and aquatic mammals will become first victims of oxygen hunger. Gary Schaffer of Denmark’s Niels Bohr Institute and his Chilean colleagues modeled the evolution of the earth’s ecosystem. The scientists predict the extinction of many ocean dwellers, whereas the disruption of the biological balance will trigger a global catastrophe. Millions of dead sea animals will float on the water surface, and only tiny creatures and herbal organism will survive at ocean depths. 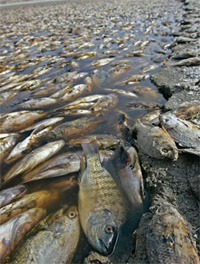 The scientists based their gloomy forecast on the analysis of the changes of the atmosphere, the oceans, the earth’s crust and the biosphere since 1756. Two and a half centuries of industrialization hugely affected the environment. The global warming and the higher concentration of carbon dioxide in the atmosphere affected the planet’s water resources too.

The level of oxygen in the ocean has been decreasing during the recent years. The supreme forms of ocean life will make the first group on the endless death list. Ocean oxygen depletion will kill fish and sea mammals in the first place. Octopuses, crabs and shellfish will become extinct next. Sponges and corals will suffer changes as the species and will lose their skeletons. Phytoplankton and animal plankton inhabiting the ocean surface will absorb nitrogen in the water. As a result, the biomass of the plankton will undergo a tremendous growth turning the ocean into a huge rotten swamp.

One can already observe the first vestiges of the imminent disaster in shallow coastal waters contaminated with agricultural fertilizers. Those areas are practically dead – there are neither crabs nor shellfish there. The dead zones will continue growing during the upcoming several years if mankind does not take measures to control the hazardous industry.

It is not the first time when the planet comes across the problem of oxygen hunger. The hunger triggered the mass extinction of many species of animals and herbal organisms. A great number of sea animals died 93 million years ago upon the formation of the Caribbean tectonic plateau. The volcanic activity, which accompanied the formation of the plateau, decelerated the circulation of oxygen and carbon. Such a global catastrophe was enough to exterminate flora and fauna on the planet.

US scientists from the University of California, Berkeley, discovered that periods of mass extinction occur every 62-65 million years.

Over 99% of species that ever lived are now extinct, but extinction occurs at an uneven rate. Based on the fossil record, the background rate of extinctions on Earth is about two to five taxonomic families of marine invertebrates and vertebrates every million years. Marine fossils are mostly used to measure extinction rates because they are more plentiful and cover a longer time span than fossils of land organisms.

Since life began on earth, several major mass extinctions have significantly exceeded the background extinction rate. The most recent, the Cretaceous–Tertiary extinction event, occurred 65 million years ago, and has attracted more attention than all others because it killed the dinosaurs. In the past 540 million years there have been five major events when over 50% of animal species died. There probably were mass extinctions in the Archean and Proterozoic Eons, but before the Phanerozoic there were no animals with hard body parts to leave a significant fossil record.