Each lymphocyte circulating in the lymph of the human blood travels through all blood and lymph vessels of the body from 10 to 20 times during a day. A lymphocyte covers the distance of 100 and more kilometers during its life cycle. 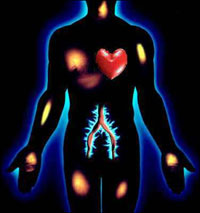 Each leg of a spider has a certain area made of thinnest hairs. Each of those hairs is made of tens of thousands of thinner bristles that interact with the surface on the molecular level with the help of Van der Waals forces. The power of these intermolecular forces is very weak, and they can hardly be noticed against the background of other forces. However, the adhesive power of hundreds of thousands of bristles is rather large. About 600,000 hairs allow a spider to sit on the ceiling and bear the weight which exceeds the weight of a spider 170 times.

The osmotic pressure inside bacteria may reach four kilograms per a square centimeter, which is fives times as much as the atmospheric pressure.

A shark is capable of sensing one gram of blood dissolved in 600,000 liters of water at the distance of 500 meters.

Each square inch of the human body contains 32 million bacteria.

About 50,000 of your body cells will die and will be replaced with new cells while you are reading this sentence.

The average human body contains enough: sulphur to kill all fleas on an average dog; carbon to make 900 pencils; potassium to fire a toy cannon; Fat to make 7 bars of soap; phosphorus to make 2,200 matchheads; and enough water to fill a ten-gallon tank.

The tooth is the only part of the human body that does not regenerate.

Only one man would be enough to repopulate the whole plane in six months because a man’s testicles produce 10 million new sperm cells every day.