Jupiter and its moons prepare nuclear winters for Earth

Inexplicable phenomena take place on Jupiter, the largest planet of the solar system. The gas giant has been quiet for hundreds of years. However, two new red spots have been formed in its atmosphere over the recent three years. Each spot is five or ten times bigger than the Earth. 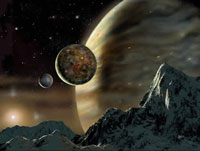 Jupiter and its moons prepare nuclear winters for Earth

Mysterious phenomena take place on one of its largest moons, Europa, too. Its ice-heavy poles shifted 90 degrees and changed their places with the equator in May of the current year.

In photos: Jupiter, the vacuum cleaner of the Solar System

Jupiter is the only planet in the solar system which has the thermonuclear reaction happening in its depths. This process of the planet is similar to that of stars, although Jupiter produces a lot less energy as a result of the process. Needless to say that the solar system may suffer a tremendous explosion in the event something goes wrong inside its biggest planet. The blast wave will reach Earth and destroy every living organism on it.

The Jupiter disaster develops according to the scenario described in Arthur Clarke’s Space Odyssey epic. In Clarke’s novels, Jupiter becomes a star as a result of a thermonuclear reaction, which triggers the development of life on its moon, Europa.

In addition to that, St. Petersburg-based scientist Eduard Drobyshevsky said that the planet’s another giant moon, Callisto, may experience drastic changes too. The ice shell of the moon may explode, the scientist believes. Gigantic pieces of the ice shell will fall down on Earth, exterminating all forms of life.

Scientists say that massive ice shells of other moon-like natural satellites of giant planets (Saturn and Jupiter) have exploded before. Many short-period comets were formed as a result of such explosions.

“Imagine this. Our Moon is enveloped in ice, the thickness of which is 800 kilometers. This is what a typical massive natural satellite like Jupiter’s Callisto looks like. It is dirty ice, which conducts electric current because all of this moves in the magnetic field, in the magnetosphere of a giant planet. Ice is a very good conductor, especially if it is dirty. Electrolysis of ice occurs as a result,” Drobyshevsky told RIA Novosti.

Drobyshevsky said that one of such ice explosions took place about 10,000 years ago, when the ice shell of Saturn’s moon – Titan – exploded. The explosion resulted in the creation of Titan’s atmosphere, Saturn’s ice rings and several short-period comets.

Jupiter’s satellite, Callisto, has the oldest ice shell among all natural satellites of all planets of the solar system. The shell has not exploded before and can thus be saturated with hydrogen and oxygen – the products of ice electrolysis. Consequences of their detonation can be fatal for planet Earth.

“Callisto is a lot closer than Titan. The explosion of its shell will lead to nuclear winters on Earth. It will be a horrible disaster for the biosphere,” Drobyshevsky said.