Chinese astronauts have all chances to suppress USA’s space pride

The notorious lunar race has a new leader. China holds very good chances to become the next nation to land on the Moon after the USA. 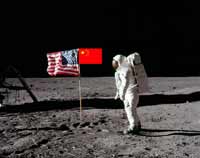 Chinese astronauts have all chances to suppress USA’s space pride

It was not so long ago when China joined the main competitors in space exploration. Yet, the country has been making steady progress at this point. China has successfully launched two manned spaceships and currently harbors plans to launch its own orbital station. To crown it all, China has big hopes to send its astronauts to the Moon.

The two projects –the Chinese orbital station and the moon landing – are likely to be executed during the forthcoming ten or fifteen years. The USA plans to take a walk on the lunar surface again with the help of Orion spacecraft in 2020.

NASA Administrator Michael Griffin stated in 2007 in Washington that he was certain that China would make its way to the Moon before the Americans would do the same. Mr. Griffin is certain that if China wants to leave the USA behind and land its astronauts on the Moon, then it has all chances to succeed.

The first Chinese astronaut was sent to space in 2003. China immediately became the third member of the space club, which only had Russia and the USA as its members.

It is worthy of note that administrators of the Chinese space program prefer not to specify any details. They say that they have neither plans nor dates for a manned flight to the Moon. However, NASA already has several initiatives to conduct cooperation with China in terms of space exploration.

In 1990 Japan visited the moon with the Hiten spacecraft, becoming the third country to orbit the moon. The spacecraft released the Hagormo probe into lunar orbit, but the transmitter failed, thereby preventing further scientific use of the mission. In September 2007, the SELENE spacecraft was launched, with the objectives "to obtain scientific data of the lunar origin and evolution and to develop the technology for the future lunar exploration", according to the JAXA official website.

NASA launched the Clementine mission in 1994, and Lunar Prospector in 1998.

In 1998, HGS-1, a commercial satellite from Hong Kong, China, performed two flybys of the moon in order to change orbital inclination.

The European Space Agency launched a small, low-cost lunar orbital probe called SMART 1 on September 27, 2003. SMART 1's primary goal was to take three-dimensional X-ray and infrared imagery of the lunar surface. SMART 1 entered lunar orbit on November 15, 2004 and continued to make observations until September 3, 2006, when it was intentionally crashed into the lunar surface in order to study the impact plume.

The People's Republic of China has begun the Chang'e program for exploring the Moon and is investigating the prospect of lunar mining, specifically looking for the isotope helium-3 for use as an energy source on Earth. China launched the Chang'e 1 robotic lunar orbiter on 2007-10-24.