Scientists have found evidence of water on the Moon. A new analysis of volcanic glass which was recovered from the Moon during the Apollo mission of the 1970s showed that the rocks contain water molecules. The research thus challenges the notion that the Moon is absolutely dry. 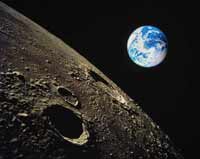 The discovery suggests that water was present in the Earth’s natural satellite when the pebbles were formed during lunar eruptions about 3.6 billion years ago.

“Most people believed that the moon was dry. People had tried to measure for 40 years and couldn't see any evidence for water ... they were not convinced we were doing something worthwhile,” said Alberto Saal at Brown University in Rhode Island, who was part of the team that did the research.

Alberto Saal other scientists of the group used a highly sensitive technology to analyze the rocks recovered during the Apollo 15 mission in 1971 and 1972. The scientists found traces of hydrogen along with chlorine and fluorine which can be found in rocks from explosive eruptions.

The discovery of hydrogen alongside other elements suggested to scientists that water came from inside the moon and not from an external source, such as a comet. Based on the amount of hydrogen found in the pebbles, scientists estimated the lunar magma contained 260 to 745 parts per million of water, similar to what is found in the Earth's upper mantle. The discovery is highly important taking into consideration future intentions to build a base on the Moon.

The finding throws at least a little water on the currently favoured hypothesis concerning the moon's origin. Many scientists think that the moon was formed when a large proto-planet slammed into Earth, sending into space molten debris that eventually became the moon. Scientists have long assumed that the heat created by the collision would have vaporised any water present and that the small gravitational field of the primeval moon would not have been strong enough to recapture the vapour.

On January 14, 2004, U.S. President George W. Bush called for a plan to return manned missions to the Moon by 2020. NASA is now planning for the construction of a permanent outpost at one of the lunar poles. The People's Republic of China has expressed ambitious plans for exploring the Moon and has started the Chang'e program for lunar exploration, successfully launching its first spacecraft, Chang'e-1, on October 24, 2007. India intends to launch several unmanned missions, beginning with Chandrayaan I in February 2008, followed by Chandrayaan II in 2010 or 2011; the latter is slated to include a robotic lunar rover. India also has expressed its hope for a manned mission to the Moon by 2030. The U.S. will launch the Lunar Reconnaissance Orbiter in 2008. Russia also announced to resume its previously frozen project Luna-Glob, consisting of an unmanned lander and orbiter, which is slated to land in 2012.