Ice may disappear from the North Pole this summer

It seems unthinkable, but for the first time in human history, ice is on course to disappear entirely from the North Pole this year. 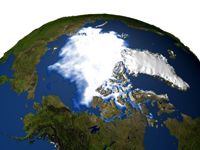 Ice may disappear from the North Pole this summer

The disappearance of the Arctic sea ice, making it possible to reach the Pole sailing in a boat through open water, would be one of the most dramatic – and worrying – examples of the impact of global warming on the planet. Scientists say the ice at 90 degrees north may well have melted away by the summer.

"From the viewpoint of science, the North Pole is just another point on the globe, but symbolically it is hugely important. There is supposed to be ice at the North Pole, not open water," said Mark Serreze of the US National Snow and Ice Data Centre in Colorado.

If it happens, it raises the prospect of the Arctic nations being able to exploit the valuable oil and mineral deposits below these a bed which have until now been impossible to extract because of the thick sea ice above.

Seasoned polar scientists believe the chances of a totally icefreeNorth Pole this summer are greater than 50:50 because the normally thick ice formed over many years at the Pole has been blown away and replaced by hugeswathes of thinner ice formed over a single year.

This one-year ice is highly vulnerable to melting during thesummer months and satellite data coming in over recent weeksshows that the rate of melting is faster than last year, when therewas an all-time record loss of summer sea ice at the Arctic.

"The issue is that, for the first time that I am aware of, the NorthPole is covered with extensive first-year ice – ice that formed last autumn and winter. I'd say it's even-odds whether the North Pole melts out," said Dr Serreze.

Each summer the sea ice melts before reforming again during the long Arctic winter but the loss of sea ice last year was so extensive that much of the Arctic Ocean became open water, with the water-ice boundary coming just 700 miles away from the North Pole, The Independent reports.

As Pravda.Ru previously reported the computer of the Russian Academy of Sciences reproduced the climate of the past and gave the detailed analysis of the climate of the future. Academician Valentin Dimnikov said that the global warming at the end of the 22nd century would count more than three degrees. The warming will be quite considerable in the 21 century too.

As far as the geographic distribution of the climate change is concerned, the strongest warming will take place in 200 years in the Arctic. The ice of the North Pole will thaw and appear only in winter time. The temperature of temperate latitudes of all continents in the northern hemisphere will rise by four or six degrees. The warming above the oceans and in the southern hemisphere will be less considerable – two or three degrees.