Russians to operate computers by power of thought 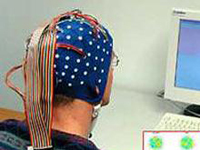 Russians to operate computers by power of thought

The scientists of Southern Federal University won 750,000 dollars award for the development of the systems of the mental computer control. For the next 18 months Rostov scientists together with their Taganrog and Saint Petersburg colleagues are going to develop programs and make a research that will help them to create such a system.

The system is to work in this way: special equipment will catch brain signals that go through the metal helmet with electrodes. Then with the help of the signal enhancer the signal will go to the computer. This will make the life of disabled people much easier. Those who can’t move will be able to write email letters and even IM people around the world.

Read also: US scientists unveil NASA’s secrets about cities on the Moon

A person, who can’t speak, will be able to point to the picture ‘Drinks’ or ‘Food’. ‘Those, who can’t move, will get a chance to write emails and even drive wheelchair by the mind power’, - says a head of the Research Institute of Neurocybernetics Boris Vladimirskiy. He adds that to rule the computer a person needs to state clearly the thought command, for example, by imagining how he is moving the cursor of the mouse on the computer screen.