Vampires are proved to exist

Legends about vampires, so popular among gothic-style fans, have a real base. People that fear daylight, have yellow fang-like teeth, animal-looking nails and are allergic to garlic do exist, not to mention those who merely wear black, gothic jewelry, gets fang implants and bites innocent old ladies while high. By the way, the fact that old ladies are bitten isn’t a myth; in the Kaliningrad region a teenager killed 2 pensioners for a special vampire ceremony. The cruelest accident happened in Great Britain 4 years ago. Then a 17-year teenager slaughtered his female neighbor, teared out her heart and sucked out blood to gain immortality. 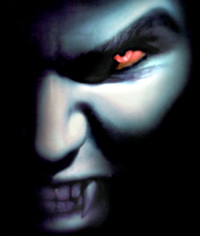 Vampires are proved to exist

Almost each nation has legends about vampires that hunt people at night and drink their blood. In these legends vampires are cruel, heartless, half-decayed creatures. For example, Slavic mythology has a belief that a vampire won’t get out of grave if you throw some corn inside. The vampire will count corns all night long. But the image of a vampire has changed. Today it is an enigmatic sexy superstar that kept its peculiar traits: love of blood, hate for garlic, and fear for the sun. In the Middle Ages the legend about vampires was complemented with the information that they fear cross and Holy Water. That remained a myth until 1963, when a British doctor Li Illis made a stunning announcement: vampire-werewolf is nothing more than a victim of a genetic pathology – porphyria.

This is a rare disease – only 1 in 20000 people suffers from it. The body doesn’t produce red corpuscles and thus a person’s blood lacks oxygen and iron and this leads to hemoglobin breakdown under the sunshine. Soon blisters and ulcers pop up; a person starts to have sun energy and can even die. This disease can also cause nose, ears and cartilages deformation. His fingers start to convolve; the skin around mouth gets dry and reveals gums, which turn yellowish because of porphyrine deposition on the teeth. Garlic that stimulates red corpuscles emission in the body of healthy person causes the exacerbation of symptoms among the ill people. This goes hand in hand with harsh pain, so these people also often suffer from mental disability.

If you sum up all the symptoms of this disease, you get the exact same picture of a vampire shown on TV. In France only in the 17th century 30 thousand people were declared werewolves according to the signs described by Illis. All of them were hanged. The Czech archeologists found the burying that dates back to the 11th century. There were 13 people lying with tied hands, chopped off heads and stakes in the chest.

Porphyria is not infective – it is an inherited disease. If one of the parents suffers from it, the child is 25 percent probable to inherit it. The reason for it can be hepatitis C, incest and excessive alcohol drinking.

They say that in the Middle Ages people that had porphyria were cured by blood, though it’s pointless as it doesn’t stanch pain. Today patients get blood-based injections. This disease though is neither examined nor cured.

Russian scientists don’t pay attention to this problem. In distinction from the West, we have neither qualified specialists, nor equipped medical centers to deal with this disease.