Not UFO, but a Bee over Dagestan (Part II) 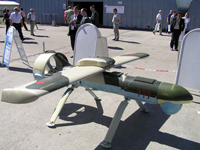 Not UFO, but a Bee over Dagestan (Part II)

Click here to read ‘Not UFO, but a Bee over Dagestan (Part I)’

Similar “UFO” flew into the Soviet Union back in 1969, and turned out to be an unmanned American espionage aircraft. The Soviets were sufficiently impressed, and their government ordered that a similar aircraft be developed per Soviet standards and equipment. However, the Soviets were designing their own unmanned spy planes back in the late 1950s and 1960s. We can be certain that some UFO sightings through the years of the Cold War were nothing but tests of such aircraft observed by innocent bystanders.

Meanwhile, the Pchela was incorporated, as a weapon, by Russian armed forces in 1997. There is a special unit dedicated to the use of unmanned aviation systems in the town of Akhtyubinsk, in the Astrakhan province of southern Russia (a Russian state aviation research center is located there as well). Russian Bees are sold to foreign buyers, too, and have been featured at the Russian pavilions at the international aviation exhibitions. The Russians have used the Pchela in Chechnya, but Mr. Fyodorov doubts that the Russian military has utilized the weapon’s potential fully. However, Russian Military Parade magazine (1999) claims something different. Their information came from a source in the Russian Defense Ministry. This source claimed that decision to use PRCs in Chechnya to provide continuous aerial reconnaissance and target designation data for the Federal troops has been taken after analyzing the results of combat operations in Dagestan. The fact is, when suppressing the fire positions of the rebels, the Russian troops were in lack of reconnaissance information, transmitted in the real time mode. Also, in 1995, the Stroy-P complex was already used in Chechnya (a Pchela weighed 138 kilograms at the time).

According to www.rg.ru/english/Archiv/2000/0114/1.htm , the unmanned air reconnaissance military unit was situated on the mountain Goiten-Kort near Khankala. The “plane-robot” proved its unique abilities having received a lot of valuable information that saved hundreds of lives. But the Russian Defense Ministry lacked funds to procure the upgraded weapons (according to the information form 1999; obviously, in the year 2000 the funds to procure upgraded Stroy-P complexes were found). According to the same source, the Pchela-1 RPC made 10 flights in Chechnya, with the total flight time accumulated of 7 hours 25 minutes. Why would the Pchela be operated over Dagestan? -To provide the round-the-clock control over 200 kilometers of the Chechnya border, and to block the attempts of rebels to penetrate the adjacent territories, according to the Military Parade’s source.

In 2000, the same magazine had an interesting article written by Nikolai Novichkov , Editing Director of the ITAR-TASS Department of Scientific and Technical Information. The author claimed that due to financial restraints, the Defense Ministry has not yet purchased a single new Stroy-II complex and currently has only three earlier produced sets (the article was published in early 2000), one of which was tested in Chechnya. Russia's Defense Ministry is expected to spur adoption for service of the Pchela-1T RPV (or RPC-P.S.) with night vision equipment. The Pchela-1T RPVs employed in Chechnya (at the time Mr. Novichkov’s article was published) were equipped with only day surveillance TV cameras. The Pchela version, fitted out with infrared night-vision devices, was developed a long time ago, but its tests still had not been completed in early 2000 due to lack of funds. In November of 2000 the tests were performed, as the sightings reported confirm. Another confirmation of the tests can be found here: http://www.vor.ru/science/madeinrus15_eng.html

The “UFO” sighted over Dagestan, it appears, was one of Russian Army’s tactical reconnaissance assets.

By the way, in 1989 a Nikolai Novichkov was one of the editors of the English-Russian Dictionary of Antimissile & Anti-satellite Defense (Moscow Military Publishing House). The dictionary had unidentified flying object as an entry (page 353). I believe he is the author of the article in Military Parade. This is a footnote in the turbulent history of UFOs over the USSR.