On the 19th day of this month, the English science fiction writer Arthur Clarke died, the really last big author of this type, at the age of 90. His best known work is 2001 A Space Odyssey, written at the request of director Stanley Kubrick, that was turned into a most significant science fiction movie (and, for many people, insurmountable today). 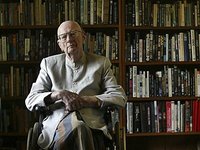 Clarke was a graduate in physics, and during the Second World War he worked in radar stations - one of the most important elements in the defense of Great Britain during the massive aerial attacks of Germany in 1940. Soon after the war, in 1945, he prepared a proposal to put artificial satellites in geostationary orbit (in other words, on the same point of the planet) to allow radio transmissions to the entire world - this orbit forever came to be known as the Clarke orbit, and was the first theoretical preparation of telecommunications satellites that allow the transmission of information in real time to the whole world.

From the end of the 40s, he started to devote himself to works of fiction and scientific discovery and, one of the most famous being one of the most excellent of its kind. A short story of this time is The Sentry, which contains the basic subject of 2001: on the Moon an ancient alien object is found, that proves that our planet had been visited by a very advanced civilization before humanity existed, and that it was the one responsible for the evolution of intelligence in the world. From this was the origin of the famous monolith that appears in 2001.

This subject appears in another famous Clarke novel, The End of the Childhood.

This book also deals with paranormal questions, in which the author at the time was interested.

Many critics affirm that his works have poor psychology, which is true: compared with the great masters of traditional literature, his characters are one dimensional and not very deep. However, his works are of real scientific fiction, since they are based on facts (and not on absurd fantasies, as with many authors of this type), and replete with fascinating data. For example, in 2001 the descriptions of Japetus, a moon of Saturn, are almost prophetic, thinking that at the time in which the book was written very little was known of the external planets and the complex systems of moons.

In 1956, he moved to Sri Lanka, where he lived until his death. He adored his new country, and he acquired Cingalese citizenship. In 1959, he contracted polio, which then began to leave him paralyzed, and already in the decade of the 80’s he started to use a wheelchair. From there his interest for diving appeared: the aquatic environment seemed to him similar to the weightlessness experienced in space travel, and therefore he did not feel any restriction of movement.

In 1998, the sensationalist tabloid The Sunday Mirror accused him of abuse of Cingalese children. Police of Sri Lanka, however, never found any evidence, and the newspaper itself then was exposed. In the year 2000, Clarke became a knight of the British Empire.

Clarke was always quite critical of religion, coming to affirm even in his book 3001 that this is the “madness of humanity.” Another story, The Star, states that the star that guided the Three Kings up to the manger where Christ was born was a supernova that destroyed a prosperous and peace-loving civilization. Even though it is true that many crimes were committed in the name of religion, it does not mean that this doctrine is to blame: anyone can write dogmas, more than noble it will be, and then they can be corrupted to serve as a pretext for cruel acts.

Moreover, Clarke committed the quite common mistake of believing that atheism is a scientific and rational position. We have no elements to affirm that there is a supreme being, but also we have none to deny it, and atheism is a question of equal faith to any religious belief. The only really scientific approach, on this type of question, is agnosticism, as well noted by the scientist (and also occasional writer of fiction) Carl Sagan.

On the other hand, Arthur Clarke always showed a great faith in humanist values. He believed that humanity should unite peacefully to explore and to colonize other planets, instead of wasting resources and lives in wars. He was very critical of the military-industrial complex and a story of his at age 50 shows a supercomputer planned by a genius anarchist to always answer with abuses every time they try to use it for war questions. Beyond that, already in his first works you can note his position of tolerance not only for all cultures and religions, but also for different sexual orientations.

On his 90th birthday, celebrated in October of last year, Arthur Clarke affirmed that his three greatest wishes were: that humanity would manage contact with an alien civilization, would depend less on oil, and would end the civil war in Sri Lanka. Unfortunately, he died without seeing them carried out.