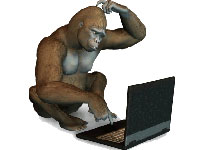 Imagine finding a planet where robots are programmed so that they can make other robots just like themselves from raw materials.

The analogy above certainly is not perfect but it is sufficient to reveal the fallacious thinking of those who attack intelligent design behind life and the universe.

Of course, once there is a complete and living cell then the genetic progam and higly complex biological mechanisms exist to direct the formation of more cells. The question is how could life or the cell come into existence naturally when there was no directing mechanism in Nature.

Chance physical processes can produce some level of order but it is not rational to believe that the highest levels of order in life and the universe are by chance. For example, amino acids have been shown to be able to come into existence by chance but not more complex molecules or structures such as proteins which require that the various amino acids be in a precise sequence, just like the letters in a sentence. If they're not in the right sequence the protein molecules will not function. A single cell alone has millions of protein molecules!

There is no innate chemical tendency for the various amino acids to bond with one another in a sequence. Any one amino acid can just as easily bond with any other. The only reason at all for why the various amino acids bond with one another in a precise sequence in the cells of our bodies is because they're directed to do so by an already existing sequence of molecules in our genetic code. Without being in a proper sequence protein molecules will not function.

The best little article ever written refuting the origin of life by chance is "A Few Reasons an Evolutionary Origin of Life Is Impossible" by scientist and biochemist Dr. Duane T. Gish. Dr. Gish presents "simple" but profound scientific barriers to evolution of life which aren't mentioned or covered in Johnny's high school biology textbook or in college textbooks for that matter. This article is truly great! Dr. Gish's aricle may be accessed for reading at: http://icr.org/article/3140/ where also links to other articles may be found.

Trust me, Dawkins and all the evolutionists put together can't hold a candle to the scientific genius of Dr. Gish. Just read one of Dr. Gish's books and you'll see why. Dr. Gish has successfully debated hundreds of evolution scientists in secular colleges and universities across the nation over the past two decades, and students have consistently voted him the winner in all of those debates. Don't try looking for this news in the main stream media. You won't find it there anymore than you'll find a half-evolved chipmunk running around in your backyard!

Think about it! If humans must use intelligence to perform genetic engineering, to meaningfully manipulate the genetic code, then what does that say about the origin of the genetic code itself!

Even in the recent case, as reported in the news, involving the creation of what is called synthetic (or artificial) life, scientists don't actually create or produce life itself from non-living matter. What scientists do in this case is create (by intelligent design) artificial DNA (genetic instructions and code) which is then implanted into an already existing living cell and, thereby, changing that cell into a new form of life. And, again, even if scientists ever do create a whole living cell from scratch (and not just its DNA) it still would not be by chance but by intelligent design. Synthetic life is another form of genetic engineering. But God was there first. Remember that!

Considering the enormous complexity of life, it is much more logical to believe that the genetic and biological similarities between all species is due to a common Designer rather than common evolutionary ancestry. It is only logical that the great Designer would design similar functions for similar purposes and different functions for different purposes in all of the various forms of life.

The term "natural selection" is simply a figure of speech. Nature, of course, does not do any active or conscious selecting. It is an entirely passive process. Darwin did not realize what produced biological variations. Darwin simply assumed that any kind of biological change or variation was possible in life. However, we now know that biological traits and variations are determined by the genetic code.

Another reason for why macroevolution is not possible in Nature is because a half-evolved and useless organ waiting millions of years to be completed by random mutations would be a liability and hindrance to a species - not exactly a prime candidate for natural selection. In fact, how could species have survived over, supposedly, millions of years while their vital (or necessary) organs were still in the process of evolving!

How, for example, were animals breathing, eating, and reproducing if their respiratory, digestive, and reproductive organs were still incomplete and evolving? How were species fighting off possibly life-threatening germs if their immune system hadn't fully evolved yet?

What if we should find evidence of life on Mars? Wouldn't that prove evolution? No. It wouldn't be proof that such life had evolvedfrom non-living matter by chance natural processes. And even if we did find evidence of life on Mars it would have most likely have come from our very own planet - Earth! In the Earth's past there was powerful volcanic activity which could have easily spewed dirt containing microbes into outer space which eventually could have reached Mars. A Newsweek article of September 21, 1998, p.12 mentions exactly this possibility.

Even the scientific followers of Prigogine, the father of Chaos theory, have admitted that only a very minimal level of order will ever be possible as a result of spontaneous or chance processes.

Those advocating the teaching of intelligent design are not demanding that Darwinian theory no longer be taught. Rather, the advocates of intelligent design want the merits of both theories taught side by side when the issue of origins is covered in science classes and textbooks. This is only fair.

All of this simply means that real science supports faith in God. Science cannot prove that we are here by chance (evolution) or by design (creation). However, the scientific evidence can be used to support one or the other.

It is only fair that evidence supporting intelligent design be presented to students alongside of evolutionary theory, especially in public schools which receive funding from taxpayers who are on both sides of the issue. Also, no one is being forced to believe in God or adopt a particular religion so there is no true violation of separation of church and state.

There is, of course, much more to be said on this subject. Scientist, creationist, debater, writer, and lecturer, Dr. Walt Brown covers various scientific issues ( i.e. fossils, biological variation and diversity, the origin of life, comparative anatomy and embryology, the issue of vestigial organs, the age of the earth, etc. ) at greater depth on his website at http://www.creationscience.com . Another excellent source of information from highly qualified scientists who are creationists is the Institute for Creation Research ( http://www.icr.org ) in San Diego, California.

The author, Babu G. Ranganathan, is an experienced Christian writer. Mr. Ranganathan has his B.A. with academic concentrations in Bible and Biology from Bob Jones University. As a religion and science writer he has been recognized in the 24th edition of Marquis Who's Who In The East. The author's articles have been published in various publications including Russia's Pravda and South Korea's The Seoul Times. The author's website may be accessed at: http://www.religionscience.com .