Extraterrestrial beings caught on tape for the first time ever

Extraterrestrial beings have finally been taped on video, the head of the Turkish UFO Center, Haktan Agdogan said. 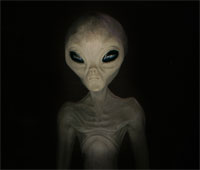 Extraterrestrial beings caught on tape for the first time ever

The ufologist said at a special press conference in Istanbul that a local resident, a watchman from one of cottage townships, managed to film an extraterrestrial spaceship and two aliens. The lucky man, named as Yalcin Yalman, presented his 22-minute video to reporters. The video can be found on YouTube (click to watch the video).

Haktan Agdogan said that the tape will evoke a wide response in the world because it is the first-ever footage that depicts not only a UFO per se, but its shining metallic surface. More importantly, silhouettes of two extraterrestrial beings are clearly visible on the tape.

Recent notable sightings of unidentified flying objects took place in 2007. Eyewitness Afzal Khan told CNN IBN that he photographed a UFO on May 28, 2007. "Today (Monday) at around 9 pm (IST), I and my brothers saw a bright, slow-moving object which looked like a group of lights moving in a triangular formation in the sky towards west/north-west direction. This object was definitely not an aeroplane as it was moving very slowly. We observed the object from around 9 pm until 9.30 pm before it disappeared into the distance. During this time we managed to take some pictures with my camera. The astronomical/space/science departments of any activity in the sky during the above time can be confirmed. We live in Jayanagar area of Bangalore. Another thing that we noticed during this time was an aircraft that took-off from Bangalore Airport was flying very close to this object. It is possible that the pilot of that aircraft could have spotted this object as well."

Many people claimed to see a UFO near Eastern Metropolitan Bypass(Calcutta) on October 30, 2007. Its was also recorded by an amateur videographer. It was like a ball of light which some time hovered, sometimes moved very fast and changed shape and size. The video was broadcast in local news channels.

In January of 2008, nine separate lights were spotted moving in an arc formation across the sky at around half past midnight on New Years Day. Around the globe, many people are said to have reported the same exact lights seen in the sky.