The head of the Russian Space Agency, Anatoly Perminov, told reporters the agency may not be able to satisfy requests of people seeking space trips past 2009. According to Perminov, more crew members will be added to space flights, leaving no room for tourists seeking a space journey. 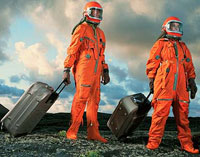 Pravda.Ru has asked Steven Freeland, Associate Professor of International Law, University of Western Sydney, to give some comments and forecasts about space exploration in 2008.

Pravda.Ru: What are the most important achievements of 2007 in the field of space?

Steven Freeland: 2007 was the 50th anniversary of the successful launch of Sputnik 1 by the Soviet Union, and the 40th anniversary of the 'Magna Carta' of international space law, the Outer Space Treaty. As a result, there was a significant degree of information and awareness that was widely distributed about humankind's activities and ambitions in outer space.

There was considerable focus on the developments with the International Space Station, the European problems with the Galilleo project and, unfortunately, the ongoing developments - both in terms of technological development and political rhetoric - regarding the military uses of outer space, particularly the proposed Missile Defence Shield of the USA. These plans - as well as the suggestion that countries such as Poland and the Czech Republic would allow important elements of the MDS to be located in their respective territory - drew sharp criticism from Russian President Putin, with the suggestion the Russia would develop its own version of the MDS in response.

In addition, Japan has announced that it would develop MDS technology and, perhaps more significant than anything else, China successfully destroyed a redundant Weather Satellite early in the year. The Chinese action drew criticism from many countries regarding not only the military and strategic repercussions of such a test, but also because it added significantly to the 'pollution' of space. Space debris is highly dangerous and has the potential to cause catastrophic damage should there be a collision.

Overall the many technological developments in space, and the celebrations of humankind's wonderful achievements in space in the 50 years since Sputnik 1, were overshadowed during the year by the ominous increase in overt military technology utilizing space.

Steven Freeland: Following on from the developments of 2007, I see the most crucial aspect of the use of outer space in 2008 as being the imperative for negotiation and agreement - by the major space faring nations but also by the broader community - of guidelines and protocols regulating the military and aggressive uses of outer space. This is a crucial issue and, if not addressed, will threaten the freedom of use and 'peaceful purposes' nature of outer space activities, perhaps also encouraging an 'arms race' in space.

This in itself would challenge the possibilities for other significant and positive uses of outer space to increase the standard of living of all humankind.

In addition to this, we should see further developments regarding the commercialization of space tourism and the further launch of important telecommunications satellites.