Russia’s largest air show MAKS-2007, which finished its work on Sunday, has confirmed it again that the national defense complex has been progressing greatly after the collapse of the Soviet Union. The defense industry of Russia makes a very serious addition to the export income of the country. The air show also demonstrated to the whole world that oil is not the only source of income for the Russian Federation. 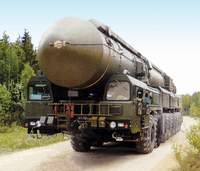 Western experts say that Russia’s strategic nuclear forces will have not more than 500 nukes in 10 or 15 years – silo-based or installed on Topol-M missile complexes, a dozen of Tu-160 bombers and a couple of nuclear submarines. In this case, as foreign experts see it, the United States will be able to destroy the low-power arsenal with only one preventive strike.

Russia’s new defense complex will not let this happen. The country is capable of defending all reasonable initiative of within the scope of its international sovereignty. Russia’s nuclear arsenal is enough to restrain any country of the globe, including the USA in spite of their active missile defense system developments. In the beginning of 2006 Russia had 927 carriers of nuclear weapons (Strategic Offensive Weapons) and 4,279 nukes for them. For comparison, the USA possessed 1,225 carriers and 5.966 nukes. Lieutenant General Nikolai Artyukhin said that

Russia had destroyed over 1,000 carriers of nuclear warheads within the scope of the Strategic Arms Reduction Treaty (START). Russia is supposed to reduce its nuclear arms to 1,700-2,200 units according to START-1 Treaty, signed in 1991 by Mikhail Gorbachev and George Bush. However, a number of associated problems arise at this point which may pose a serious threat to Russia’s security. For example, Russia has been destroying its nukes since the 1990s under the supervision of US inspectors. The USA simply removed warheads from missiles and preserved them so that it could be possible to remount them.

Putin expressed his opinion on the matter in February 2007 at an international press conference in Munich, Germany. “If the new Defense Secretary of the United States is going to stand up today and say that the USA will not be hiding the nukes at warehouses or under pillows and blankets I offer everyone to give a standing ovation to such an announcement,” Putin said. Everyone in the room remained silent to Putin’s remarks.

Apparently, the USA does not intent to stick to the arms race. US STRATCOM Commander, James Cartwright, stated that a refusal to prolong the START-I Treaty will ease an opportunity for the USA to implement the fast global strike concept. It goes about a missile attack striking any part of the world within only one hour.

Sergei Markov, the leader of the Institute of Political Research, believes that the USA continues the policy of the forced global leadership. “The strongest country in the world is virtually ruled by extremists who make tremendous mistakes,” the scientist said. The Russian administration simply has to think about the preservation of the entire nuclear arsenal of the nation against such a background. Russia has already tested the new ballistic missile – RS-24, which will replace the outdated RS-18 and RS-20. In addition, Russia started developing a plane of new generation for long-distance flights. The flights of strategic bombers have been resumed as well. To crown it all, Russian defense specialists continue working on the project of building eight new Borei submarines, the first of which - Yuri Dolgoruky - has already been launched. The new sub is equipped with up-to-date missile complex Bulava-M, which is capable of reaching targets at a distance of up to 8,000 kilometers.

The export constituent of the Russian defense complex also plays a highly important role for the national budget. In 2006 Russia’s arms exports returned eight billion dollars of profit in 2006. This year the amount may increase to 30 billion.