Russia announced Wednesday it was nominating former Czech prime minister and ex-central bank chief Josef Tosovsky to head the International Monetary Fund. Tosovsky has become a second European candidate to enter the race to head the IMF. He will stand against the European Union candidate, former French finance minister Dominique Strauss-Kahn who is likely to be chosen as the next managing director of the IMF. The West saw Russia’s initiative as yet another act of attempted confrontation and a sign of new rivalry waiting in the wings. Although Russia looks set to oppose the candidacy of Strauss-Kahn, it is unlikely that Russia will succeed in getting things done according to plan. 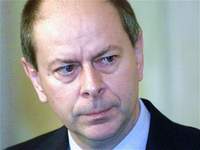 Traditionally, European countries select the head of the IMF and the United States chooses the president of the World Bank. A number of attempts to change the tradition have been made over the last several years. In theory, a change is still within the bounds of possibility. In actuality, there is a very slim chance that the arrangement will be changed because a winner must receive 85 percent of the quota. In other words, the United States and the EU countries, the most influential member states of the IMF, must support one’s candidacy in any case. Blocking the selection of a favorite in the race is the farthest an IMF member state can do if it is opposed to the traditional parameters. Russia is going to give it a try by making use of the ambitions of developing countries, which for years have criticized the longstanding tradition.

Josef Tosovsky was born in 1950. He graduated from the Prague Higher School of Economics in 1973, earning a degree in foreign trade. He worked in Czechoslovakia’s central bank and the London-based affiliate of the state-run Jivnostenska Bank until 1985. Four years later he was promoted to deputy director of the Jivnostenska Bank in London. Tosovsky became head of Czech central bank in 1993. He was prime minister from 1997 to 1998. Tosovsky now works for the Bank of International Settlements in Basel, Switzerland. Tosovsky has “serious practical experience in the area of international economic cooperation,” said the Russian Finance Ministry, in a statement released on Wednesday.

Russia is primarily counting on the support of Latin American countries i.e. Venezuela and Brazil. “Developing countries should be given a chance to nominate their own candidate for the post”, Brazilian Finance Minister Guido Matega was quoted as saying by news agencies some time ago. Russian Finance Minister Alexei Kudrin said Wednesday that other countries from the developing world, including India and China, could pledge their support to the Russian nomination of Tosovsky. However, Russia’s plan has also to find favor with a number of other countries e.g. South Africa, Indonesia, Mexico and Saudi Arabia so that Russia could be empowered to block a candidate, the Russian finance newspaper Vedomosti reports. Several Latin American countries are inclined to put their weight behind Tosovsky’ candidacy, according to a source closely associated with the talks at the IMF, Vedomosti reports.

Aside from the lack of support for Tosovsky’s candidacy within the EU, the IMF could give a Russian-nominated candidate the cold shoulder for a number of other reasons. First, the West sees his nomination as Russia’s political gesture aimed at stirring up confrontation. The Washington Post dubbed the Kremlin’s decision “another challenge,” a move designed to put Russia and the West at odds. Russia simply makes a point of nominating its candidate, and the West is well-aware of Russia’s intentions.

As a result, the West does not consider the Russian nomination as a threat to the candidacy of Strauss-Kahn. The U.S. Treasure said it looked forward to “speaking with any candidate” for the post of managing director of the IMF. “We look forward to working with our colleagues at the Fund to select a new managing director who will continue the reform efforts at the IMF and provide leadership to its vital institution,” said Ann-Marie Hauser, spokeswoman for international affairs at the U.S. Treasury. In other words, the United States actually accepted a game Russia is trying to play. It appears that the United States sees it as an innocuous ploy.

Second, Russia’s nomination of Tosovsky got a cold response in the Czech Republic, which apparently favored the EU identity over its own. Czech Finance Minister Miroslav Kalousek said that Tosovsky “is not the candidate of the Czech Republic.” The Czech government “will respect the recommendations of the council of economic and finance ministers of the EU,” Kalousek was quoted as saying by Czech media. The European Union made a decision to nominate Strauss-Kahn as its candidate for the post in July.

Third, Tosovsky’s reputation could be irreparably stained by local media reports based on data from the declassified archives of the Czech communist regime’s secret police. According to reports published earlier this year, Tosovsky workedfor the secret police in the 1980s. The reports gave rise to mush controversy over Tosovsky in Czech society. Now the public may take a tougher stand on the issue as a negative opinion on Tosovsky, “the secret police agent,” is likely to hold the spotlight in the media outside the Czech Republic. Despite Russia’s efforts to make Tosovsky appear in a different light, his candidacy will be seen as completely pro-Russian, a candidacy that has nothing to do with the choice of developing countries.