Putin and Bush agree to disagree respectfully in Kennebunkport

U.S. relations with Russia are on simmer, so President George W. Bush's meeting Monday with Russian President Vladimir Putin will be judged on how respectfully the two leaders agree to disagree. 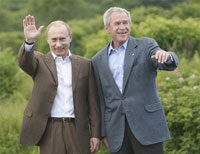 Putin and Bush agree to disagree respectfully in Kennebunkport

They have different views on democracy and missile defense, NATO expansion into Russia's backyard and independence for Kosovo. They both want to stymie Iran's nuclear weapons ambitions, but they don't see eye-to-eye on whether Iranian missiles currently pose a threat.

It was all handshakes, smiles and kisses when Putin arrived at the Bush family estate that overlooks the rocky Atlantic seacoast. Putin gave pecks on the cheeks to first lady Laura Bush and the president's mother, Barbara Bush, and handed them bouquets of flowers. Before disappearing from public view, Putin was seen aboard former President George H.W. Bush's speedboat, zooming along the coastline, grinning and waving to photographers.

There was "family-style dialogue" about coming elections in both countries as they dined on lobster and marinated swordfish, but the two leaders didn't have in-depth talks about policy differences, Putin spokesman Dmitry Peskov said Sunday night.

He denied any tense discussions.

"Definitely not," Peskov said. "We could not have predicted the warmness and hospitality from President Bush. The Russian president was very much satisfied with that."

But for all the pleasantries and talk about patching up the Bush-Putin friendship and forging fresh relations with Russia as it transitions from its communist past, the rhetoric coming out of the Kremlin of late seems mired in the Cold War.

Buoyed by a strong economy, Putin has become more assertive on the international stage. At home, he's stoked nationalism, encouraging Russians who want their country to be viewed with respect - as a powerful player, not a world power wannabe. In short, Putin feels he has gotten the brush-off from Bush.

"It's vital that this relationship be doctored a bit," said Sarah Mendelson, Russia policy expert and senior fellow at the Center for Strategic and International Studies.

In February, Putin blasted the United States, saying it had "overstepped its national borders" in every way. And Putin has taken a tough stance against a U.S. missile system planned for Europe, even threatening to reposition Russian rockets in retaliation for an American-engineered missile shield in Poland and the Czech Republic.

Last month, Putin surprised Bush in Germany by proposing the shareduse ofaRussia-rented early warning radar in Azerbaijan as a substitute for radar and interceptors the United States wants to place in Poland and the Czech Republic. Defense Secretary Robert Gates has said the United States will not embrace the facility in Azerbaijan as a substitute, but Peskov says Putin wants to hear that from Bush himself at Kennebunkport.

Putin has repeatedly rejected U.S. assurances that the planned missile defense installations pose no danger to Russia and are meant to counter a potential threat from other nations, such as Iran.

"We know that Iran is not a threat," Peskov said. "If radar will not have any missiles to track from the Iranian parts, then the job of radar will be inevitably to work against Russian military infrastructure. And this is a problem for us. This is a threat for our security."

While both sides downplayed expectations for the meeting, the two leaders were expected to call their missile defense experts to a joint meeting so they can learn about the installations the United States is proposing and the capabilities of the Azerbaijan system.

They might also come to a closer understanding about getting a third, tougher round of U.N. Security Council sanctions against Iran because of its refusal to stop enriching uranium. Tehran says the enrichment is intended for a nuclear energy program; the West suspects Iran wants to develop nuclear bombs.

This tiny seacoast town has welcomed the Russian delegation, but an estimated 1,700 demonstrators interrupted a peaceful Sunday afternoon. They called for the impeachment of Bush and an end to the war in Iraq.

"We have a job to do and that job is to hold this administration accountable and take this country back," said John Kaminski of Maine Lawyers for Democracy, a group of 80 attorneys pushing for impeachment proceedings.

Other demonstrators targeted Putin, who is accused of suppressing mostly Muslim, separatist rebels in the breakaway region of Chechnya. Victoria Poupko, who moved from Moscow to Boston 17 years ago, said Bush and Putin are "both criminals" for torture, war crimes and abuse of power, among other things. She carried a sign that said: "Stop imperialism. Bush out of Iraq. Putin out of Chechnya."

Bush, who feels Putin has tried to muzzle free speech, would have approved of a chant led by one demonstrator.

"Tell me what democracy sounds like," she yelled to her followers.