Venezuelan President Hugo Chavez visits Russia on the regular basis. Chavez comes to Moscow almost every year, always in summer time. The busy schedule of the Venezuelan leader, who entirely devoted his presidency to anti-American policies, combines a visit to Russia with a tour of several other countries, which he views as closest allies in the struggle against the US supremacy. 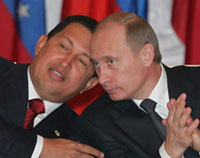 Hugo Chavez used to be given a hearty welcome in Moscow during the first years of Vladimir Putin’s presidency. However, Chavez started making his visits to Moscow during extremely inconvenient time afterwards. Last year, for example, Chavez was eager to visit Moscow on the threshold of the G8 Summit in St.Petersburg. The Russian administration had to postpone the visit until the end of July. The delay did not affect the Russian-Venezuelan relations, though: Venezuela purchased military hardware from Russia in the sum of three billion dollars.

This year Chavez was getting ready to make another pompous visit to Moscow. Chavez said before his trip to Russia that Vladimir Putin supposedly assisted him during the coup in 2002. Afterwards, Chavez said that he would like to deliver speeches for Russia’s Federal Assembly or State Duma.

However, Chavez has chosen a very bad time to visit Moscow again. Putin is leaving for the USA for a meeting with US President George W. Bush. The meeting may become the last chance for Russia and the USA to settle down the controversy with Washington’s missile defense plans in Eastern Europe. Hugo Chavez may show a negative influence on the outcome of the forthcoming talks between Putin and Bush.

Chavez has expressed interest in the possibility of buying Russian submarines despite likely criticism from the United States, which has voiced concern about Venezuela's recent military spending.

The South American nation has already purchased some US$3 billion (EUR 2.25 billion) worth of arms from Russia, including 53 military helicopters, 100,000 Kalashnikov rifles, 24 SU-30 Sukhoi fighter jets and other weapons.

Chavez is later slated to travel to Belarus for meetings and possible talks about an air defense system equipped with radar and anti-aircraft missiles. The former paratrooper commander said this week that Venezuela's current short-range system was insufficient.

Chavez then will travel to Tehran for talks aimed at further deepening ties with Iran, one of Venezuela's closest allies outside Latin America.