US Russophobes criticize Putin, comparing him with cartoon characters

Isn't it scandalous that US Congressman Tom Lantos has compared Russian President Vladimir Putin with a rather stupid cartoon sailor? And this is at the time that Russophobe Lantos is known for his absolutely not wide views, and US President Bush is a constant inspiration for cartoon makers. 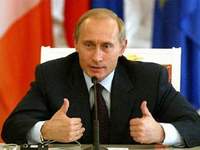 US Russophobes criticize Putin, comparing him with cartoon characters

Last Thursday, the International Committee of the US House of Representatives received a delegation of the Russian Federation State Duma. The delegates discussed issues important for both Russia and the US and particularly burning for Europe either. Deployment of US anti-missile forces in Poland and Czechia, Moscow’s alternative suggestion on joint usage of the Gabala radar station in Azerbaijan were on the agenda of the meeting.

On the eve of the meeting in an interview to Reuters Tom Lantos made it clear that there would be no constructive exchange of views between both sides. In a word, he rather aggressively warned that the US would not compromise on any of the issues on the agenda.

To make his statement sound even more striking, Lantos said that it was “incredibly stupid” of Putin to speak about possible redirection of Russian missiles onto Europe. He also compared the Russian president with an American cartoon hero, sailor Popeye who ate spinach to pump his muscles.

Every country has politicians who earn their living by breaking agreements and dialogue with insulting and impudence. The USA is the country that employs the tactics actively. America allows aggressive interviews of US politicians and Congress resolutions to make attempts to interfere into Russia’s affairs.

Last week, the House of Representatives adopted a resolution on the initiative to involve foreign law enforcement structures into the Russian investigation of killings of independent journalists in this country. And it is quite clear that Moscow asked for no assistance of American benefactors at all.

Lantos known for his Russophobe statements also insisted several times that a report on human rights in Russia must include a statement that the YUKOS was a political case. He also demanded that the Russian Federation must be ousted from G8. The congressman is an inveterate critic of the Kremlin political line, a champion of Russian democracy and an advocate of the opposition and mass media that in his opinion are terribly oppressed in Russia.

If we take the political culture level into consideration we may conclude that Lantos is a typical product of the arrogant, rude and self-complacent political machine of the USA. If partners or opponents chance to at least slightly discord from Lantos’ personal political views the congressman immediately flies into a rage.

And Russia’s President Vladimir Putin was not the only object of the congressman’s criticism and rage. Lantos called ex-chancellor of Germany Gerhard Schroeder “a political prostitute receiving checks from Putin”. He also blamed ex-president of France Jacques Chirac for the depreciation of US’s role in the liberation of France from Nazis. He even told the former French president to go to the Normandy coast and see marble crosses and David stars mounted there in memory of American soldiers.

But this is strange that the congressman has not thanked Soviet soldiers who smashed the Quantun army and saved the lives of US soldiers. But for the help of the Soviet army US soldiers would have been involved into the campaign on the Japanese islands for another twenty years. But this story about the Japanese campaign may sound not really impressive for the American political elite.

A Russian student who studied political sciences in Russia told about her probation period at an American university. When she came to the university an American colleague asked her where she came from. When the girl replied that she came from the Russian city of Vladivostok the American student seemed to be not aware of the place. Then the Russian student explained that the place was close to Japan, and the American colleague still looked puzzled. When the girl asked the student if he knew where Japan was he replied that he knew that Japan was in Afghanistan. May it be so that American congressmen are also unaware of Japan’s location?