Britain's call for the extradition of a suspect in the killing of former KGB agent Alexander Litvinenko is "stupidity," President Vladimir Putin said in an interview released Monday. 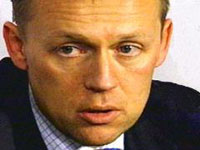 Putin's harsh characterization is likely to further trouble British-Russian relations that already have hit a post-Cold War low amid the controversy over the killing. Litvinenko died in London in November from poisoning by a rare radioactive isotope.

Britain last month said it had enough evidence to charge Russian businessman Andrei Lugovoi in the killing and asked for his extradition. Lugovoi, who is also a former KGB member, had met with Litvinenko shortly before he fell ill.

Putin said British officials should have known that Russia's constitution would prevent the extradition.

"From whatever side you look at this problem, there's one stupidity," Putin said in an interview with journalists from Group of Eight countries ahead of this week's G-8 summit in Germany.

"If they didn't know (about the constitutional prohibition) it's a low level of competence and thus we have doubts about what they're doing there," Putin said, according to a transcript released by the Kremlin. "And if they knew and did this, it's simply politics, the AP reports.

"This is bad and that is bad from all sides it's the same stupidity," Putin said.

At a Moscow press conference on Thursday, Lugovoi tried to turn the tables, saying he had evidence Litvinenko was a spy for Britain, and British secret services had killed him.

"This is absolutely not true," Marina Litvinenko told Reuters in an interview this weekend. "I saw my husband every day, and I didn't notice that he was a 'super agent'."

"Everything (Lugovoi) said... He's just trying to defend himself. And I just don't think it's for me to comment. Because he's the person who killed my husband."

The book, "Death of a Dissident", which Marina Litvinenko co-wrote with family friend Alex Goldfarb, has passages which read like a Hollywood screenplay.

It features a cast of spies, thugs, oligarchs, terrorists, journalists and Kremlin heavies, bouncing from Chechen rebel redoubts to Moscow jail cells, to Turkish hotels, to London court rooms, to the hospital where Litvinenko wasted away.

"It's quite personal, about his life, when we meet each other and our son was born, how he changed during this time," Marina Litvinenko said. "It is quite important to understand how a person from the FSB became a dissident."

After months wondering whether anyone would be charged in the case, Marina Litvinenko said she was satisfied that British police and prosecutors were taking it seriously.

"For almost four months I wasn't sure the Crown Prosecution Service would take this decision to say exactly the name of the person who killed my husband," she said. "People said: nobody would like to spoil this relationship with Russia, because Russia is a very powerful country."

"But finally there is the accusation of Lugovoi and (the request for) his extradition. I am very satisfied."

The Kremlin is likely to see the book as a self-serving volley from the camp of Litvinenko's boss, the exiled tycoon Boris Berezovsky, Reuters reports