President Vladimir Putin believes that the term of presidency in Russia should be five-seven years but that one and the same person should not remain in office for more than two consecutive terms. 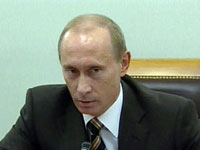 He spoke for keeping the constitutional restriction of two consecutive terms but said that four years is a rather short time for one presidential term.

"I believe that the time restriction is correct after all. Four years for Russia - probably copying the U.S. practice - was not very debated then when the new constitution was approved. Sergei Mironov, the speaker of our Federation Council, once said that it would be more appropriate for Russia to have a term of five or even seven years. I am not speaking of the duration now, it could be five or it could be seven years, but four years is a fairly short time," he said in an interview with reporters for the printed press from G8 countries, Interfax reports.

Mr. Putin has said that he will make his own choice known during the presidential campaign in early 2008. The two names most often mentioned in Russia and abroad are two of his closest colleagues, first deputy prime ministers Sergei Ivanov and Dmitri Medvedev.

But Timothy Colton, director of Harvard's Davis Center for Russian and Eurasion Studies, said recently that all kinds of Kremlin names are being bandied about and that the eventual successor may come out of the blue.

“All this is keeping in mind that in 1999 [former president Boris] Yeltsin surprised us by picking Putin as his successor, and so there is the precedent, and he's certainly going to have a very good chance of imposing whomever he wants,” Mr. Colton said in an interview with the U.S. Council on Foreign Relations.

“He simply hasn't tipped his hand yet.”

One of the few declared candidates is Viktor Gerashchenko, a 69-year-old former central banker and former chairman of Yukos oil company, who has set himself up as compromise candidate of Russia's fracture opposition.

Without unity “the opposition will have no possibility of making some shift in the direction of democratic change,” Mr. Gerashchenko said recently.

Most early media attention has focused on Mr. Ivanov, touted earlier this month as the front-runner by Konstantin Remchukov, owner and editor-in-chief of the Russian daily Nezavisimaya Gazeta, citing “three very serious sources in the Kremlin.”

Mr. Ivanov, 54, oversees Russia's military-industrial complex. Like Mr. Putin, Mr. Ivanov is a former KGB official and moved to the Kremlin on his advice. Mr. Medvedev, 41, is like Mr. Putin in another way. He is a lawyer by training, and they worked together in the St. Petersburg municipal government in the early 1990s. As well as being a first deputy prime minister, Mr. Medvedev is also chairman of the energy giant Gazprom, theglobeandmail.com reports.

Speaking to foreign reporters days before Putin he to Germany for the annual summit with U.S. President George Bush and the other Group of Eight leaders, Putin assailed the White House plan to place a radar system in the Czech Republic and interceptor missiles in neighboring Poland. Washington says the system is needed tocounter a potential threat from Iran.

Putin said neither Iran nor another pariah state, North Korea, have the rockets that the system is intended to shoot down, suggesting the system would be used instead against Russia.

"We are being told the anti-missile defense system is targeted against something that does not exist. Doesn't it seem funny to you, to say the least?" an irritated Putin said.

He added that the planned missile shield would cover Russia's territory up to the Ural Mountains.

Putin lamented that the planned system would be "an integral part of the U.S. nuclear arsenal" in Europe an unprecedented step. "It simply changes the entire configuration of international security."

He said he hoped that U.S. officials would change their minds regarding the missile plan, warning that Moscow was preparing a tit-for-tat response.

"If this doesn't happen, then we disclaim responsibility for our retaliatory steps, because it is not we who are the initiators of the new arms race, which is undoubtedly brewing in Europe," Putin said.

"The strategic balance in the world is being upset and in order to restore this balance without creating an anti-missile defense on our territory we will be creating a system of countering that anti-missile system, which is what we are doing now," Putin said.

Last week, Russia tested a new ballistic missile capable of carrying multiple nuclear warheads and a new cruise missile. While Western analysts said the system has probably been under development for several years, Putin has described the test as part of Moscow's response to the U.S. anti-missile plan.

In an interview published by Italy's Corriere della Sera on Sunday Putin also suggested that Russia could respond to the threat by aiming its nuclear weapons at Europe.

Asked whether the planned U.S. missile defense shield in Eastern Europe would compel Moscow to target its own missiles on U.S. military sites and other locations in Europe, Putin replied, "Naturally, yes."

"If the American nuclear potential grows in European territory, we have to give ourselves new targets in Europe," he was quoted as saying. "It is up to our military to define these targets, in addition to defining the choice between ballistic and cruise missiles. But this is just a technical aspect."

Putin also suggested that in the absence of a real threat from Iranian and North Korean missiles, the U.S. plan could be an attempt to spoil Russia's relations with Europe.

Relations between Moscow and Washington have soured in the past year. The two former Cold War foes are at odds over Washington's missile plans, over Russia's conflicts with former Soviet nations including Ukraine, Georgia and Estonia and over U.S. concerns of democratic backsliding in Russia, the AP reports.