New Russian missile R-500 to destroy any US defense system 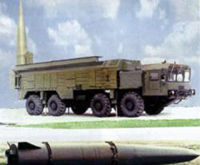 New Russian missile R-500 to destroy any US defense system

R-500 tests are to be finished in 2008, whereas in 2009 these missiles will be used to equip the Iskander tactical missile systems.

The tests of the new missile took place at the Kapustin Yar site in the Astrakhan Region of Russia. First Deputy Prime Minister Sergei Ivanov said that R-500 was a high-accuracy missile, capable of destroying ballistic missile defense systems and air defense systems. Ivanov also said that “these tests were preliminary and it is very pleasant to realize that they were successful”.

The flight of R-500 lasted for 24 minutes. Reporters observe the launch from the distance of six kilometers. The missile reached the height of 100 meters about three minutes after the launch and developed the speed of 250 meters a second. Having passed the half of its way the missile began to descend. The deviation was only 30 meters in spite of the wind and hot weather.

The ICBM , called the RS-24, was fired from a mobile launcher at the Plesetsk launch site in northwestern Russia earlier. Its test warhead landed on target some 3, 400 miles away on the Far Eastern Kamchatka Peninsula, the Strategic Missile Forces said in a statement.

Ivanov said the missile was a new version of the Topol-M , first commissioned in 1997 and known as the SS-27 in the West, but one that can carry multiple independent warheads Existing Topol-M missiles are capable of hitting targets more than 6, 000 miles away.

While Ivanov's saber-rattling about missile defense penetration was clearly aimed at the United States - and at Russians who will vote in March for a successor to Putin - he suggested Russia's armament efforts were also aimed to counter a potential threat from the Middle East and Asia.