Russia to test Iskander tactical missile systems on May 29 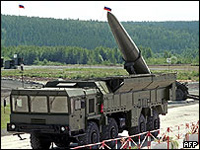 Russia to test Iskander tactical missile systems on May 29

The tests will take place at a testing range near Znamensk in the Astrakhan region, he said, adding that he will attend them with Defense Minister Anatoly Serdyukov, Interfax reports.

The system is intended to use conventional warheads for the engagement of small and area targets, such as:

- fixed- and rotary-wing aircraft at airfields;

- other vital small and area targets.

The Iskander-E system is equipped with a solid-propellant single-stage guided missile controlled throughout the entire flight path and provided with a nonseparable warhead.

In flight, the missile follows a non-purely-ballistic path, which includes such features as violent maneuvers in the terminal phase of flight and the release of decoys. The missile never leaves atmosphere as it follows a relatively very flat trajectory. These features are meant to defeat any anti ballistic missile systems operating in the world today.