Russia is not going to deliver businessman Andrei Lugovoi to Great Britain, an official spokeswoman for the Russian Office of the Prosecutor General said. Lugovoi is suspected of being involved in the poisoning of Alexander Litvinenko, a former officer of the Russian Federal Security Bureau. 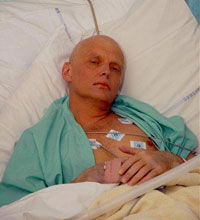 “A Russian citizen, who committed a crime on the territory of a foreign state, can upon presentation of material by this state, be called into criminal account on the territory of Russia only,” an official spokeswoman for the Russian Office of the Prosecutor General, Marina Gridneva said as quoted by Interfax.

“For the time being we have not received any official documents from Great Britain about the charges brought against a Russian citizen, nor do we have any documents about his extradition on the case of Alexander Litvinenko’s poisoning. Of course, if such documents arrive, they will be given profound attention to, and all charges against the Russian citizen will be looked into against the background of the murder case, which the Office of the Prosecutor General investigates,” Gridneva said.

Andrei Lugovoi, who has repeatedly denied any involvement with the death, had met with Litvinenko - also a former KGB operative - at a London hotel only hours before Litvinenko became ill with polonium-210 poisoning.

Based on news reports of Russian and foreign media