Vladimir Putin, the President of the Russian Federation: 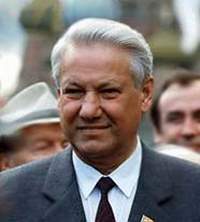 “Boris Nikolayevich Yeltsin, the first President of Russia, has died. With this title he has entered the history of both Russia and the whole world. The person, who started a whole new era has gone. The new democratic Russia was born with his help - the country that is now open to the world, the country where the people hold the power.

“The power of the first president of Russia was about the support that people were showing to his ideas and aspirations. The new Constitution of Russia was passed owing to Boris Yeltsin’s will and initiative. The new Constitution placed human rights on top of the list of national values. It gave people a possibility to express their ideas, to freely elect the power in the country and to implement creative or business plans. The Constitution triggered the creation of the real and effective federation.

We knew Boris Yeltsin as a courageous but a cordial and sincere person. He was the outspoken and brave national leader. He was utterly open and honest when he was defending his views.

Today I present my sincere condolences to Boris Yeltsin’s wife Naina Yeltsin, to all of his relatives. We are mourning with you. I declare April 25, 2007 the day of national mourning in Russia.

Mikhail Gorbachev, the first and the last President of the USSR:

“I addressed to Naina Yeltsin and the whole family. I am truly sorry about their loss. The fate made us meet and we had to act during the time when the country was going through changes of paramount importance. Our approaches to state matters were different indeed, which obviously affected other events that were happening in the country at that moment. But right now I think about the fact that we both wanted to bring good for the country and its people.

Visit Pravda.ru bulletin board to express your opinion