The return of the islands is the basis of the peace treaty with Russia, Japanese politicians say

The scandal between Russia and Japan regarding the sovereignty of Kurile Islands has resumed this week again. Answering a question from a resident of Sakhalin in Russia's Far East during a call-in conference held on September 27, President Vladimir Putin stated that the sovereignty of Russia's four Kurile Islands was not to be discussed. Japanese Prime Minister Junichiro Koizumi said two days later, though, that Japan would continue to insist on the return of the islands. According to Koizumi, it would be the mandatory condition upon which Japan would agree to sign the peace treaty. 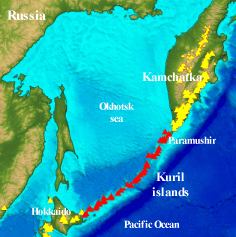 Speaking about relations with Japan, the Russian president said that there were certain questions left that the two countries had unsolved, including the one about the sovereignty of Kurile Islands. “It is a very sensitive question both for Russia and for Japan. I am certain that we always can find variants that would be good for the both sides,” Putin said. The president added that the islands are under the Russian sovereignty that is fixed by international agreements. “These are the results of WWII, and we are not going to discuss anything at this point,” Putin concluded.

The Japanese administration responded with a rather predictable reaction. The Japanese PM said in the parliament that Japan was advancing steadily to sign the peace treaty with Russia after the return of the four South Kurile Islands. Chief Cabinet Secretary Hiroyuki Hosoda was more explicit in his statement: "The return of the islands is the basis of the peace treaty. There are certain doubts about Russia's sufficient awareness of all historical nuances. That is why Japan constantly needs to repeat its requirements on the matter,” Hosoda said.

Both Russia and Japan have been setting out their readiness to sign the peace treaty for 50 years already, although things still remain right where they started. The previous president of Russia, Boris Yeltsin, conducted formal talks with the former Japanese PM, Ryutaro Hashimoto, Russian and Japanese diplomats attempted to conducted economic agreements and set up numerous bilateral committees to settle a variety of issues. To crown it all, there was a special board established in October of 2003, in which well-known political and public figures of both Russia and Japan were included. Neither of those efforts have brought any positive results so far: members of the council said that they would most likely have to leave the dispute to future generations.

The territorial dispute heats up around the four islands: Iturup, Kunashir, Shikotan and the Habomai ridge. Russia considers the four islands its own territory. According to the peace treaty signed after the end of WWII, all Kurile Islands were put under the USSR's sovereignty. Japan, however, differentiated the legal and geographical notions of Kurile Islands and emphasized that it always distinguished them from the remaining group of islands. Japan agreed once for the return of only two islands, Shikotan and Habomai, which used to be a part of Hokkaido prefecture. However, when Junichiro Koizumi took the office, the Japanese administration demanded the return of all the four islands and refused to sign the peace treaty with Russia.

Japan obviously has its weak points in the dispute, the energy dependence on Russia, first and foremost. Japan is not rich with mineral resources, but there is also a question of defensive weakness as well: Japan has been deprived of the right to have a real army for more than 50 years already.

Apart from all of that, Japan suffers from the overpopulation crisis. Japanese authorities are forced to make artificial islands trying to obtain more territory for people. The 130-million-strong Japan has the population density of 350 people per one square kilometer. It goes without saying that Japan is very envious of Russia, where this index reaches only nine people per one square kilometer. However, the living standard in Japan is a lot higher than in Russia; Japan has become one of the world's leading technological and economic powers too. Those residing in South Kurile Islands have a possibility to visit Japan without any visas. Furthermore, practically all Russians living in the Far East of Russia own Japanese vehicles – they do not wish to drive Russian cars at all.

Japan is one of the world leaders in the development of oil-alternative energy sources. It is not ruled out that Japanese scientists may soon relieve their nation of the need to purchase and use oil. As for the army, Japanese law-makers have already approved a plan to turn self-defense forces into powerful Armed Forces outfitted with up-to-date weaponry. It is worthy of note at this point that Japan can boast of having largest gold reserves in the world.

The Japanese government is not likely to change its standpoint regarding the future of South Kurile Islands. To crown it all, EU and US officials in the face of the Pentagon chief, Donald Rumsfeld, advised Russia should return all the four moot islands to Japan. Russian President Putin was supposed to visit Japan in the beginning of the current year, but the trip was not meant to take place. It brings up the idea that Putin's scheduled visit to Tokyo in November is not likely to bring any positive results either.