Russia's intention to play a more significant role in the international economic cooperation and become a full-fledged member of both the Group of Eight (which Russia is set to chair in 2006) and the Financial Group of Seven still remains open to question. Shareholders of the International Monetary Fund and the World Bank, as well as finance ministers and heads of central banks of world's leading powers gathered for an annual meeting in Washington during the past weekend. Russian Finance Minister, Aleksey Kudrin, who arrived for the meeting too, had the G7 symbol pinned to his jacket. However, the Russian finance minister was not the eighth at the meeting with his foreign colleagues. Mr. Kudrin was the twelfth sitting on additional chairs in the club of finance ministers of world's largest states. Russia had to step aside again and join China, India, Brazil and the South African Republic. 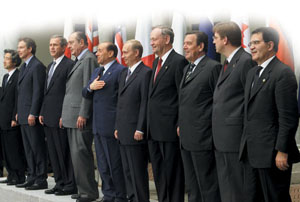 Russia has been viewed a full member of the Group of Eight since the G7 summit in Denver in 1997 (the Group of Seven includes Great Britain, the USA, France, Germany, Italy, Japan and Canada). Russia is set to chair the most prestigious international club in 2006. However, the question on to which extent Russia will be able to participate in the financial G7 in this privileged position is still open. Until recently Russia was acting as a mere observer in the solution of financial issues of the club; the club invited Russia to participate in the decision-making process regarding certain questions only.

The Foreign Affairs Minister of Russia, Sergei Lavrov, announced on the threshold of the IMF/WB meeting in Washington that Russia was about to start working in the financial part of the G8 as a full member. The US Treasury Undersecretary Timothy Adams (International Affairs) released quite a contrary statement on the matter. Adams reminded that the decision about Russia's membership in the financial section of the Group of Eight had not been made either collectively or individually. The US official suggested expanding the G7 work format owing to the inclusion of several states, the economies of which were developing speedily.

Indeed, the G7 held its meeting with the participation of state officials from Brazil, China, India and the South African Republic. The discussion about world prices on oil, for instance, required not only Russia's report as a large oil exporter, but also opinions from China and India – the key consumers of oil on the international market.

The further program of G7 meetings was also amended. Russian Finance Minister Aleksey Kudrin stated shortly after his arrival in Washington that Russia would host the financial Group of Seven in February (the September meeting was supposed to be the last this year). It was later announced, however, that the club would hold a special meeting in Great Britain under its chairmanship in compliance with England's G8 chairing status this year.

The meeting is particularly said to be held to say goodbye to the head of the US Reserve System Chairman Alan Greenspan, who is retiring in the beginning of the next year after 18 months of work. However, some observers say that the international club does not feel comfortable on account of Russia's forthcoming chairmanship, that is why they decided to discuss all basic questions of the 2006 summit in advance.

Aleksey Kudrin offered not to dramatize the absence of possibility to balance out the political and financial formats of cooperation with the world's leading powers. The minister reminded that Italy and Canada did not enjoy membership in the financial block during their first G7 chairmanship. According to the minister, there is quite a number of circumstances, which exclude a fast change of relations for the better: the non-convertible ruble, Russia's 11th position in the world economy, Russia's absence in the WTO and Russia's debtor status in the Paris Club of Creditors.

According to Kudrin, if the Russian economy preserves the current speed of its development, which is higher than the average economic development index in the world, it may give the country an opportunity to enter the top list of six most developed states of the world during the forthcoming 30-40 years. There will probably be certain progress achieved in the question of Russia's WTO membership: Russia's Minister for Economic Development, Gherman Gref, is to conduct a bilateral meeting on the matter in the USA this week.

As for the debt issue, Kudrin reminded that Russia could pay $10 billion of its debt to the Paris Club of Creditors in 2006, although the creditors do not conduct any official consultations on the matter currently. Furthermore, Russia wired almost $15 billion of the early debt payment to the club in 2005.

As a result, Russia supported the IMF/WB's decision to write off the debt of the world's poorest states. This is one of the key elements of the UN program, the goal of which is to halve the number of people living below the poverty line by 2015.

On Saturday, the IMF upheld Great Britain's suggestion to write off $55 billion of poorest countries' debt to the IMF, the International Association of Development, which is a part of the WB structure, and to the African Development Bank. The debt is to be written off until the end of the current year. G8 members will write off $40 billion of $55; Russia's share is unknown yet – Aleksey Kudrin clarified that the leaders had made only a general political decision without any specification of date and process details. The USA, France and Germany will have to carry the main burden to write off the debt, Kudrin said.

On the photo: G8 leaders