Putin's daughters enter university which changes the order at the institution

The studies began September 1, but none of the president's daughters has shown up at the University yet 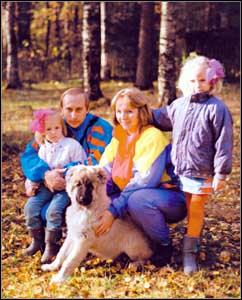 This year, the St.Petersburg State University is the focus of attention: Russia President Putin's daughters became students of the University last summer. Maria and Yekaterina Putin never go out without security, they are afraid of pronouncing their family name in public. It was just once that Russia was allowed to see the girls: their pictures at the age of 5-6 appeared in a little book published many years ago. This is quite natural that the girls have changed a lot since that time, but just few people know what they look like.

Vladimir Putin is a graduate of the St.Petersburg State University, this is probably the reason why his daughters decided to enter the University as well.

It is known that Maria Putina entered the biology and geology department of the University; graduates of the faculty acquire not very prestigious professions there. It is said that several years ago the University set-up was much different from what we see today. The changes and the new order are explained with coming of the president's daughters to the University.

Security of the University say that security measures were toughened during entrance examinations, however it was not explained for what reason that was done. Lecturers will not speak about Putin's daughters to journalists and say it is the dean who is authorized to touch upon the issue. But the dean is seldom available for interviews.

Senior students say there was absolutely no stir because of the president's daughters on September 1 when the studies began. The dean of the biology and geology department said in his ceremonial speech that now daughters of President Putin are students of the University. He added that was an honor to the University.

Majority of co-students of Maria Putina imagine they are too important to study together with the president's daughter. Indeed, not only journalists but lecturers themselves are particularly focused on the course where Maria Putina is to study. Students say they respect Maria Putina for the choice of a profession she has made and which she will study.

It is said that the issue of presidential daughters is tabooed at the University, even lecturers do not touch upon it.

A woman sitting at the entrance to the University and performing the function of a concierge says that she saw Yekaterina Putina and her grandmother, Vladimir Putin's mother-in-law, who accompanied the granddaughter to the exam. The woman says that nobody knew about the president's daughter sitting for entrance examinations. She adds that the president's daughter Yekaterina is a modest girl; she behaves as if she fears that someone may recognize her. Yekaterina was sitting for the examinations under an assumed name. And even examiners were not aware of Yekaterina Putina's presence at the examination.

It is rumored that Putin's daughters will stay in Moscow to study university subjects according to an individual program there. It is highly likely that best lecturers of the University will go to Moscow for individual lessons with the girls. But they will have to come to St.Petersburg to sit for examinations together with other students. It is said the president will not indulge the daughters and the girls will have to study diligently.

Lecturers of the St.Petersburg State University are sure that next year the departments where Putin's daughters study will be particularly popular.