Commonwealth of Independent States, the former USSR, likely to collapse and take a different form

As long as Turkmenistan pulled out from the Commonwealth, one may say that the future of the CIS is rather vague

CIS leaders gathered to celebrate the 1000th anniversary of the city of Kazan, the capital of the Tatarstan republic during the past weekend. The Commonwealth of Independent States lost one of its members, the republic of Turkmenistan: the pullout became the main result of the summit. Turkmenistan decided to keep the status of an observer only. In addition, there were certain discrepancies seen in the text of the final declaration of the summit: GUAM states (the organization incorporates Georgia, Uzbekistan, Azerbaijan and Moldavia) introduced several amendments to Russia's document about the struggle against terrorism. Ukraine did not sign documents about the joint economic space. Experts are currently analyzing the recent CIS summit in Kazan, trying to understand if it was the last meeting for the Commonwealth of Independent States or not. 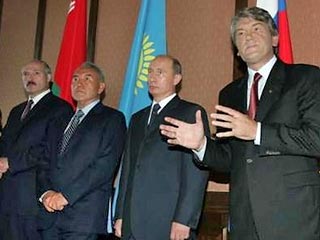 The reduction of the number of states included in the Commonwealth became the central sensation of the summit. Saparmurat Niyazov, the President of Turkmenistan, became the only president of CIS members, who did not arrive in Kazan to participate in the summit. That was quite a predictable turn of events: Mr. Niyazov, who is known as Turkmenbashi, has not been showing any interest in any integration unions and preferred only bilateral relations instead. “The father of the Turkmen nation” was quite frightened with the series of revolutions on the territory of CIS states and made up his mind to completely isolate his nation from the rest of the world.

It is noteworthy that it was Georgian President Mikhail Saakashvili, who informed the CIS leaders of Turkmenistan's decision. The republic of Georgia has not been noticed for its active participation in CIS summits on the level of ministers and experts. The Georgian president said during the summit that Georgia was willing to set up a union of democratic states around the periphery of Russian borders. The statement made a lot of observers believe that Georgia will be the next candidate to pull out from the CIS. Mr. Saakashvili said that Georgia was in the talks with Ukraine, Lithuania and other states would join them afterwards, but it would not be a substitute for the CIS. “Georgia does not think that the CIS has run out of its abilities and opportunities. The CIS has problems, and they need to be solved,” the Georgian president said.

Similar remarks sounded from Saakashvili's colleague, the Ukrainian president, only one day before. Viktor Yushchenko, who backs up the idea “to promote democracy in the former USSR,” signed a special document for humanitarian cooperation cautiously. Ukraine, Georgia, Azerbaijan and Moldavia introduced several amendments to the document about the need to respect other states' sovereignty. Similar amendments were introduced to the documents about the struggle with terrorism and extremism (the document was originally submitted by Russia): the above-mentioned leaders added the notion of “separatism” to the document.

The signing of the documents to establish the joint economic space was a long-awaited event during the CIS summit in Kazan too. Russian President Vladimir Putin said that 29 documents were planned to be signed before December 1 of the current year between Russia, Kazakhstan and Belarus. “We agreed that 15 other documents would also be signed within the same structure by March 1 of 2006. Ukraine joined the statements that were signed today. Ukraine set out its willingness to work as a group of four – it will be joining other agreements as they are being prepared and developed,” Putin said. Viktor Yushchenko specified Putin's remarks and said that Ukraine was not ready to establish supranational agencies in the joint economic space.

Ukrainian President, Viktor Yushchenko, had a meeting with the President of Belarus, Alexander Lukashenko. It is not known if the subject of Ukraine's mediation in the regulation of Belarussian-Polish relations was considered during the meeting, although Mr. Yushchenko pointed out several problems in the bilateral relations, particularly in the field of economy, politics and humanitarian spheres. Ukraine called upon Belarus to join their efforts in the struggle with consequences of the Chernobyl nuclear disaster. It is noteworthy that the presidents of the two countries failed to agree upon the dates of visits to each other.

The CIS summit in Kazan has not resulted in any progress regarding the regulation of conflicts. The meeting between the presidents of Azerbaijan and Armenia, Ilkham Aliyev and Robert Kocharyan, which was devoted to the Nagorny Karabakh problem, ended without any progress on the matter. In addition, the president of the unrecognized Transdniestr Republic, Igor Smirnov, virtually accused the President of Moldavia, Vladimir Voronin, of the breakdown of talks. “I believe that a physical guarantee, which can put an end to all criminal actions to disrupt the talk process, is extremely important for us,” said. He. Igor Smirnov thanked Viktor Yushchenko for his readiness to send Ukrainian peacemakers to the conflict region, but the tone of his statement was rather skeptic: “I remember when the army operations were getting started in 1992, there were Romanian and Ukrainian observers in the region. However, they all disappeared somewhere, and the war started,” Smirnov said.

One may thus infer that the summit in Kazan has unveiled certain vestiges of the CIS's division into two camps. The first one of them includes Russia, Belarus, Kazakhstan, Tajikistan and Kyrgyzstan (with Armenia as an observer and Uzbekistan, which decided to distance itself from revolutionary democracies after the recent events in Andijan). The second group incorporates members of the GUAM political and economic organization, whereas the republic of Turkmenistan is included in none of the mentioned associations. Discrepancies have been growing between these groups for many years already, the sides fail to come to a consolidated solution of the problem, which eventually makes the Commonwealth of Independent States become a decorative club, in which every member has its own interests. As long as Turkmenistan pulled out from the Commonwealth, one may say that the future of the CIS is rather vague, which became clear after the meeting in Kazan.