The fact of the military exercise itself pales in comparison with the political background, against which the event is happening

Russian-Chinese first-ever joint military exercise, Peace Mission 2005, will take place in the north-east of China on August 18-25. All kinds of troops, including naval forces, will be involved in the exercise. Officially, the exercise is supposed to demonstrate joint anti-terrorist measures, although even Russian and Chinese leaders say that the entire event is meant to reveal the nearing tendencies between the two countries. The news about the joint efforts made Washington feel rather nervous, taking into consideration the fact that Russia and China called upon the USA to withdraw its army bases from Central Asia before. 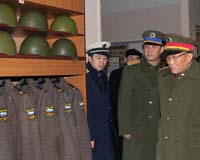 Vladimir Putin signed the decree to redeploy Russian troops on the Shandong Peninsula last week. The Russian command of the exercise arrived in the city of Vladivostok, the Far East of Russia, on Wednesday. Up to ten thousand military men are going to participate in the joint exercises, Deputy Commander of Russian land forces, Vladimir Moltensky, told Russia TV channel. Russia sent a group of vessels of the Pacific Navy, 17 aircraft, pursuit and cargo planes to China as well. Russian commandoes and marines will land in Shandong prior to the start of the offense, which will be coordinated with the Chinese army. Strategic bomber planes will fire cruise missiles at targets on the sea surface at the end of the event.

The fact of the military exercise itself pales in comparison with the political background, against which the event is happening. According to the Chinese ambassador to Russia, Liu Guchang, Chinese authorities view the wargames as the visible confirmation of the bilateral relations with Russia. The chairman of the Russian Chief of General Staff, Yury Baluyevsky, stated that Russia and China were cooperating within the framework of the Shanghai Cooperation Organization: “There is a joint anti-terrorist center in the SCO, which estimates the general situation in the part of terrorist and separatist manifestations. I do not exclude that both Russian and Chinese armed forces can be attracted to solve these goals.”

Russia and China signed a declaration at the SCO summit in Astana, Kazakhstan, in the beginning of July. The two countries urged the USA to specify the terms to withdraw its army bases from Uzbekistan and Kyrgyzstan. US Defense Secretary Donald Rumsfeld arrived in Kyrgyzstan shortly after that to announce that the USA was not going to withdraw any bases from the above-mentioned republics at all.

Washington could not help expressing concerns about Russia and China's joint military efforts. The Washington Post wrote, for example, that Russia and China intend to hold the first-ever joint military exercise to demonstrate their readiness to cooperate in the face of the USA's military presence in Central Asia. American reporters wrote that China was trying to make the event take place as close to Taiwan as possible, although Russia disagreed.

Defense Minister of Russia, Sergei Ivanov, said that he was quite bewildered about Washington's concerns regarding the exercise: “We have been conducting military exercises with the USA, other NATO leaders, India and Japan for years already. Why can't we do the same with China? I do not see any reasons or contraindications for it. We have friendly relations, we are strategic partners, and the adequate military cooperation confirms it. If it raises either interest or concerns with other states, it is their problem,” the minister said. Ivanov added that Russia and China plan to conduct even larger military exercises in 2006.

The joint military endeavor does look like the Russian-Chinese action to oppose the unipolar world indeed. Russia is concerned about the USA's activity near its borders, while China is preoccupied with the question of Taiwan, which still remains independent strictly because of US troops. The US administration prefers to entirely disregard Russia's point of view: the current military initiative gives Russia an opportunity to make the USA pay attention to its requirements.

It is noteworthy that Russia and China have similar problems with extremists in Chechnya and in Xinjiang Uighur autonomous region. It therefore gives more reasons to intensify the military cooperation. Nevertheless, the Russian administration is quite concerned about the ongoing expansion of Chinese citizens in Russia's Far East and Siberia. Despite the anti-American statements released by separate Chinese leaders, the USA still remains commercial partner No.1 for China. The military exercise is most likely meant to play the role of a tactical step, from which Russia and China will probably benefit in the future.