Russian and Western media outlets actively discuss an opportunity to change the Constitution of the Russian Federation to let Vladimir Putin be reelected for the third time in a row. The president, however, and other officials reject the third term opportunity despite numerous parliamentary initiatives on the matter. 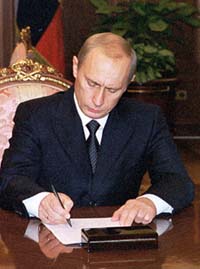 The subject surfaced in Russian political discussions again, when a Finnish journalist asked Putin this question during his visit to Finland in the beginning of August. “Maybe I would like to, but the Constitution of Russia does not allow me to do it. I believe that stability is most important factor in present-day Russia, which can be achieved on the base of constitutional regulations,” the head of state answered. Vladimir Putin stated back on 9 December 2003 that it was about time one should put an end to the rumors about the need to change the Constitution.

Nevertheless, Russian deputies still continue their attempts to prolong Putin's presidency in Russia. United Russia's deputy, Alexander Moskalets, put forward an amendment to the law about the presidential election in June. According to the deputy, if a new president is not elected as a result of the national voting, the retiring head of state will have a right to run for the third term. The majority of other deputies from United Russia, however, strictly rejected such an escape clause: “No Russian politician will ever create an artificial situation of pseudo-elections to give the president an opportunity to prolong his stay in the office,” the head of the Central Electoral Committee, Alexander Veshnyakov said.

Provocative initiatives continued stirring up the general public anyway. A member of the St.Petersburg Legislative Assembly, Igor Rimmer, developed a new project to amend the Russian Constitution, in which one and same person would not be allowed to take the post of the president for more than three terms in a row. The Central Electoral Committee rejected the initiative as well.

Despite the negative remarks from the committee and from the president himself, the Russian media decided to misinterpret the story and say that Putin would agree to change the Constitution. Furthermore, they believed that Putin would forget about the fact that only the next president would have a chance to use adequate amendments, if they were ever be introduced.

It is enough to look at the headlines, which certain media outlets used for their articles and reports: “Vladimir Putin wants to remain the president for the third time,” - Echo of Moscow radio station; “Putin would like to keep presidency after 2008,” – Gazeta.Ru. News headlines from Itar-Tass and RIA Novosti are a lot more peaceful against such a background: “Putin: The Constitution does not allow me to stay after 2008.” Not even a word about the third term.

Western media try to keep up with their Russian colleagues at this point. Peter Baker and Susan Glasser from Washington Post wrote answering a question from their reader that the opportunity for Vladimir Putin to stay in the office for the third term was the talk of the day among the Moscow elite. Putin denies the so-called “question 2008,” the journalists wrote, but the president and his team will obviously not deny their power, taking into consideration the fact that they had taken so much effort during the eight years of Putin's presidency to strengthen the power of the Kremlin.

According to The Guardian, the Russian press dwells upon four other scenarios of political events in Russia in 2008, when the nation holds the presidential election. According to the British periodical, it would be possible to change the Constitution to let Putin stay for the third time, or establish the parliamentary republic in Russia, in which Putin would be the prime minister and Russia would have a formal president instead, whom they could easily manipulate. According to another, quite bizarre version, Russia may unite with its authoritarian neighbor, Belarus, and Putin could become the president of the new unified republic.

”He will not run for the third term, the Constitution forbids it. The master of the Kremlin says that he is not going to violate it. “We have enough time before 2008,” he stated. What for? To strengthen the police regime? To save more money for his old age life, like his predecessor did? Seriously, though, the faults of the Putin regime do not envisage the peaceful transition of power. One should be concerned about a possible revision of the Constitution on the whim of the new Tsar,” Le Journal de Jura (Switzerland) wrote.

Dwelling upon Vladimir Putin's third term on the position of the Russian president, Western journalists either forget, or are not willing to recollect the fact that such initiatives periodically occurred in the USA. Russia borrowed the USA's idea about the right for one and the same person to hold the four-year presidency twice in a row. When Ronald Reagan was elected president for the second time (1985-1988), many American scientists of politics set forth a suggestion to change the Constitution and let Mr. Reagan work for another four years.

President Putin has not made any statements about the third term. When someone uses the words of a deputy to prove the opposite, one should view such situation as a political provocation. If the words of all US congressmen were made a reality, the world would be waging World War VI nowadays.