Putin likely to remain Russia's president for another term

Russia's political life has been surprisingly rich with all kinds of events this summer. The events were presumably connected with forthcoming parliamentary and presidential elections. Political parties have virtually started preparing for the pre-election race, while State Duma deputies try to make latest amendments to the law about elections. Deputies of the United Russia faction experience hard time during the discussion of the law: they have to stand for the interests of their parties and try to defend President Putin. 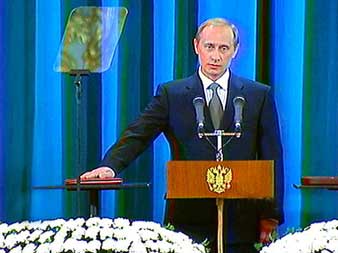 United Russia started a rather curious discussion in the parliament last week. One of the deputies suggested making a certain change in the election law, to give President Putin an opportunity to be reelected again and take the office for the third time. Deputy Alexander Moskalets said that it could probably be possible in the event Putin resigned before the election, which its turn would subsequently be found null and void.

Such a layout is quite simple and has already been tested during the gubernatorial election in Russia's Samara region. The regional governor, Konstantin Titov, resigned several months before his time in the office elapsed and then was successfully reelected. United Russia aims to use the same scheme, albeit on the federal level.

According to the current version of the election law, the president will not be able to run at early election, if he steps down ahead of the scheduled time.  However, a committee for constitutional legislation approved an amendment, which allowed a resigned politician (a governor or the president) to run again, if the early presidential election fails.

In this case, if Putin steps down, the prescheduled presidential election will be held, but its results will be nullified, if the turnout of electors is lower than 50 percent, or if the majority of people vote against all candidates. It is noteworthy that this seems to be quite a possible perspective, taking into consideration current political preferences in Russia. There are no new outstanding political leaders, whereas Russian parties are not likely to win more votes than they did at the previous elections.

United Russia is a pro-presidential structure. There is nothing shameful or criminal about the fact: the party simply represents the interests of the government at power. On the other hand, the so-called party of the power may often damage both itself and the person that it stands for. The above-mentioned initiative of United Russia is likely to become a detrimental endeavor in terms of Vladimir Putin's reputation.

Putin still enjoys quite a high rating in Russia, during the entire term of his presidency. Brushing aside the Chechen issue, the president's rating suffered a serious decline a year ago, when deputies of the pro-presidential parties decided to cut welfare benefits. The grand failure of the reform still has its negative effect in Russia. The level of protesting sentiments started growing among the population from August 2004 to February 2005. The president found himself in a very unpleasant situation: Putin had to take urgent measures to amend the law. United Russia tried to organize meetings in support of the new law, but the efforts brought absolutely no results, because the document about the elimination of state benefits touched upon the personal well-being of the majority of Russians.

It goes without saying that Vladimir Putin's rating is the highest in comparison with the ratings of his political opponents. The correlation of forces is not about to change in the near future. It is highly unlikely that one of Putin's opponents could win the support of over 50 percent of Russian voters. Russian experts believe that Putin will be able to keep his power after the presidential election in 2008. It is still not known, however, how it may happen, through a national referendum or with the help of another method. It would be best for the president to repeat the maneuver, which made him the Russian president for the first time: to abide by his obligations and try to avoid excessive nervousness.

It is worth mentioning that Russian people value Putin's calmness in public. The current initiative of the Russian pro-presidential party may cause damage to the president's reputation. Furthermore, Putin's opponents may try and use United Russia's initiative to reelect Putin again in their fight for the office of the Russian president.