High-tech cooperation will give Russia an opportunity to enter the African market through South Africa. Moscow tries to retrieve its erstwhile influence on the African continent, preparing to face tough competition with world’s leading countries. President Vladimir Putin arrived in Cape Town to solve these issues. 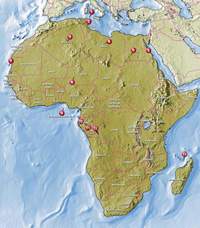 The visit to Africa, which Putin started Tuesday, was initiated with the development of the global economic system, from which Russia was gradually falling out during the recent decade. The Russian administration started formulating its geopolitical interests openly only a short time ago.

Slowly but surely the existence of the unipolar world is drawing to an end. The sweeping development of new centers of influence in Southeast Asia, China and India, the activity of the Muslim world and Russia testify to the creation of new political and economic forces in the world. Each of those forces is in need of new markets and resources to be able to develop and strengthen further on.

Moscow lost its influence in Africa for 15 years. The results of the fierce political struggle between the world’s strongest superpowers in the 1960s and the 1970s returned no results for Russia. Nowadays Russia is returning to Africa. It goes without saying that the Russian government will have to fight with both traditional competitors and new rivals who have already entered the African market: China, Mideastern countries and Latin American states.

Restricting relations with Africa on the whole and with South Africa in particular implies an obvious strategic failure for a superpower. A private initiative of such large Russian enterprises already working on the South African market as Norilsk Nickel, diamond company Alrosa or aluminium giant Rusal is not enough for expanding the cooperation. Russia needs to develop new programs in the field of high-tech industry, including military cooperation, energy and investments.

In spite of the fact that the turnover between Russia and South Africa has been characterized as positive for several years already, the two countries know practically nothing of their own technical and economic opportunities.

Unlike other countries, South Africa runs no policies to discriminate Russian companies. Quite on the contrary, the South African administration is interested in their active participation in the development of the national economy.

Russia’s current interest in Africa already starts raising concerns with foreign competitors. China will most likely be the first country to do something in response. The Chinese administration will try to minimize Russia’s current efforts in Africa. It is not ruled out that China will offer Russia an attractive investment program in the near future. Europe will intensify competition in high-tech field, whereas the USA will do its best to detract Russia’s attention from South Africa. Washington will obviously take account of its past mistakes, when it concentrated on Europe, the CIS, Russia and the Middle East and lost its influence in several Latin American countries.

Vladimir Anokhin
Scientist of politics,
vice president of the Academy for Geopolitical Problems