Putin explains why he kissed little boy on his stomach

Yesterday, Russia’s president Vladimir Putin answered the questions of internet users, posted and voted for on the Yandex portal. This internet conference took place in the build up to the G8 summit and allowed the president not only to answer questions of current interest to the Russian people, but to show the world what concerns the Russian population today. However, it did not justify hopes: the five highest rated questions were markedly unrelated to the expected topics. 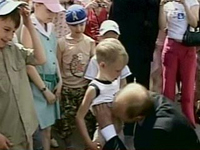 Putin explains why he kissed little boy on his stomach

This was the second internet conference to take place during Vladimir Putin’s time as the president, which demonstrates the lack of popularity of this form of communication with the head of state. The president is considerably more willing to talk to journalists at press conferences or directly to the population live on television. These two methods have practically become a tradition and occur almost every year. At this point the question arises as to why the Kremlin decided to use the internet communication method in particular this time.

It is clear that this conference was timed to occur just before the G8 summit, due to take place July 15-17 in St Petersburg. It was essential for the Russian leader to formulate and ground his position as clearly as possible with regards to external as well as internal politics and also the agenda proposed to Russia, which has sparked several debates in the West. For this, the president had to attract the Russian public opinion, preferably the more advanced sector of the population, which has access to the internet.

Bearing in mind that the audience of this internet conference consisted of not only Russian society, but also Western politicians and the Western public, this choice of method of communication with the population allowed a more adequate selection of questions, fulfilling the interests of the Kremlin on the threshold of the G8 summit. Adequacy in this instance refers to a reduction in the socially probing content, an increased share of external political topics and an increased number of more qualified and concrete questions concerning internal political problems.

With regards to a large press conference, firstly one took place already in January of this year. Secondly, and most importantly, the president wanted to show the West a particular side of public opinion from the more advanced sector of the Russian population. It is not by chance that the users were offered the possibility of voting for questions.

It can be assumed that the Kremlin was counting on a more conservative behaviour from Russian internet users. The preliminary categories provided for questions differed strikingly from those that stand out in an analysis of the questions asked. The Kremlin designated basic headings to the questions, linked to external politics, global problems and the energy debate. By this means, the government hoped to secure votes from internet users who would support the Russian external politics line. However, the people took the situation into their own hands and asked primarily about housing problems, poverty, quality of life, educationandthearmy, to say nothing oftheleading unrelatedquestions,which constituted a form of protest.

For instance, the internet users asked: “Is the Russian Federation planning on using giant military human-simulating robots to defend its borders?” Other questions included the following: “Preved Vladimir Vladimirovich! How do you feel about medved?” (The words ‘preved’ and ‘medved’ are widely used by young Russian web surfers; they have become the slang versions of privet meaning ‘hello’ and medved’ meaning ‘bear’and generated a new slang language in the Russian internet community). Other questions were: “Could you explain the reason behind your action of kissing young Nikita on the stomach?” “How do you feel about the awakening of Ktulhu?” The president would have had great difficulty not answering the highest rated questions.

When answering the question about the stomach-kissing incident, Putin said that he decided to act so simply because he wanted to show affection to the boy. Nikita looked like a little kitten, the president said. The encounter with the boy was unscheduled, of course. Putin was going to his residence in the Kremlin across the Sobornaya Square which is a great attraction for many Russian and foreign tourists alike. When Putin approached a group of tourists, he stopped for a minute to talk to them. The president paid special attention to a little boy standing near. He squatted down in front of the boy and asked his name. The boy was very shy and confused but he said that his name was Nikita. After that the President played a little with the boy, pulled up his shirt and kissed Nikita on the stomach.

Nikita said afterwards that the president simply liked him. Nikita’s teacher explained the president’s action professionally, stating that “a kiss on the stomach is a fatherly, earthly gesture”). Elena Kolmanovskaya, chief editor of Yandex, said that the cheerful questions corresponded to an improvement in quality of life.

In 2001, when an internet conference took place on a number of Russian news portals, the internet users, including some foreign citizens, were interested in the attitude of Putin and his family to the internet, the president’s thoughts on the possible replacement of part of the government management personnel in Moscow and the provinces, Russia’s democratic route as the president saw it, the problem of the increased prestige of the Russian army, private education in Russia, the Chechnya problem, and of course the president’s personal preferences and interests, particularly with regards to sport, literature and the family. In any case, the internet conference system allowed the president and his administration to select the questions that they considered most needed to be answered personally by Vladimir Putin. However, it was announced in advance that Putin would answer the most popular questions. Thus it can be concluded that they want to show the West what concerns Russia’s population today. And this is clearly not the fate of the NGOs or the problems of democracy.