Life in Moscow becomes more expensive than anywhere else

A new survey shows that today Moscow is the world's most expensive city. 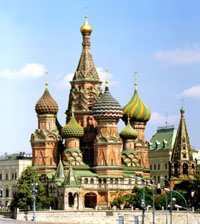 Life in Moscow becomes more expensive than anywhere else

The Russian capital moved up three spots from a year ago thanks to a recent property boom, according to a survey released Monday, while the Japanese capital slipped to third place due to the weaker yen.

The survey by Mercer Human Resource Consulting ranked 144 cities around the world, measuring the comparative cost of more than 200 items such as housing, transportation and food. The survey is aimed at helping multinational employers determine compensation for their expatriate workers.

With cities around the world getting increasingly expensive for expatriates - notably cities in developing countries - employers may need to re-examine the way they provide compensation and benefits for their workers, said Rebecca Powers, a senior consultant at Mercer.

''As we see more and more movement into these emerging markets, a lot of those programs need to be looked at,'' Powers said.

Overall, foreign exchange rate fluctuations were behind the majority of the changes in ranking, but in Moscow's case, costs were buoyed by the surging price for large living accommodations. Prices for big houses rose some 50 percent over the past year, driven in large part by soaring demand from expats, Powers said.

After Moscow, Europe's priciest cities were London, ranked No. 5 overall, and Geneva , ranked No. 7. European cities tended to fall in the rankings this year because of a weakening euro.

Chinese cities - including Hong Kong at No. 4, Beijing at No. 14, and Shanghai at No. 20 - climbed the list due mostly to the yuan's strength after being de-pegged from the U.S. dollar.

With the Brazilian real rising about 20 percent versus the U.S. dollar over the past year, Brazilian cities Sao Paolo and Rio de Janeiro surged to No. 34 and No. 40 from No. 119 and No. 124, respectively, according to the AP.

Fifteen years after the collapse of the Soviet Union, Moscow has been crowned the world's most expensive city.

It is an unlikely and dubious honour for a city that was once the capital of world Communism and the epitome of cheap, state-subsidised living.

Prices for flats have more than doubled in the past year and the average cost per square metre is about $5000 and rising by the day. A modest city centre flat is now hard to find for less than $350,000, a big price when you consider that the average national wage is $315 per month and the average monthly Moscow wage about $650.

Ordinary Russians are embracing mortgages (albeit with interest rates well above 10 per cent) in order to get a foot on the property ladder before it is too late and are rushing to put their names down for apartment blocks that have yet to be built in an attempt to avoid seemingly unstoppable inflation.

Cranes labour over Moscow's skyline day and night and immigrant workers from across the former Soviet Union toil on building sites for poverty-line wages as developers try to snap up more and more land to cash in on the boom.

There are not nearly enough good quality flats to go around and prices seem set to rise even higher. Indeed buying a flat in the Russian metropolis is now just a dream for many young Muscovites, who can only rent rooms in rundown flats in the city's concrete suburbs in Soviet-era tower blocks.

People desperate to get a foot on the property ladder resort to desperate measures; the media often carries stories of contract killers hired to bump off flat owners, of elderly people tricked out of their city centre apartments, and of apartment blocks burnt down "accidentally" to force people to sell.

Renting in the centre of Moscow is also too expensive for many. Western companies regularly shell out more than $9250 per month in rental costs for their employees and it is hard to find anything decent for less than $1800 per month. Hotel prices inMoscow are also higher than anywhere else in the world.

The average room rate is $300 per night, thanks to the city's bizarre strategy of knocking down large cheaper Soviet-era hotels and replacing them with exorbitantly priced, Western-style four- and five-star hotels, while making no provision for anyone on a more modest budget. Visitors to Moscow are therefore forced to choose between slumming it in a hostel or living it up at the Metropol.

The Mercer's report should be taken with a slight pinch of salt, however. It was primarily drawn up to help multinational companies decide how much to pay their expatriate employees posted abroad.

In other words the prices it quotes reflect the cost of living for foreigners in Moscow leading a Western-style lifestyle, rather than for locals who have often inherited apartments and live more modestly anyway.

That said, Moscow, a city that was once drab, bereft of restaurants, and whose shelves were once infamously empty, has undergone an amazing transformation in the past 15 years that has pushed prices for everything from caviar to coffee to record breaking levels.

It is not unusual to pay $7 for a pint of (Western) beer, to walk out of a restaurant after a modest meal with a bill for $36 a head, to choose the cheapest and most mediocre bottle of wine on the menu and find yourself paying $35, to be asked to pay $55 for a taxi from the airport, and to pay $80 for a pair of shoes that might cost half that in the UK.

Indeed there are two Moscows - one for foreigners who don't know what can be a bewildering city and pay a premium for familiarity and one for the locals who have retained their Soviet-style thrift. It is still possible to go anywhere on the famous Moscow Metro for just 15 roubles, to find Russian bars serving beer for $1,8 a pint, to enjoy a three-course "business lunch" in the centre of Moscow for 150 roubles, to buy a packet of cigarettes for 50 roubles, a bottle of vodka for 200 roubles and to hail an unofficial taxi and go anywhere in the city for a maximum of $7.

The fact is, though, that if Russians have money, and many people in Moscow do, they love to flaunt it. A popular anecdote about two "new Russians", both of whom have recently bought a tie, is a case in point.

How prices have changed

Price of a one-bedroom flat in central Moscow

Property prices are now closer to those of London and Paris because of the oil price boom, a lack of supply and a realisation that they were originally undervalued. Muscovites are having to take out mortgages to buy property for the first time

Price of a new but basic four-door family car

Ten years ago, the best car most Muscovites could hope for was a Lada. Today, Moscow 's streets are awash with foreign brands. Not everyone can afford a BMW or a Mercedes, but good quality Japanese cars are popular

A decade ago Moscow was just getting to grips with Western-style supermarkets and there was a poor selection of food products. Today, the capital boasts supermarkets and hypermarkets but many of the products on sale are imported, which means they cost considerably more than in the West

Price of a meal for two in a decent Moscow restaurant

Few Muscovites dined out 10 years ago but today the restaurants are doing a roaring trade. The cost of a decent meal has risen sharply, with wine being particularly expensive. In many Moscow restaurants the starting price for a bottle is the equivalent of $35, according to The Independent.