The world communist movement is currently facing a major scandal. The relations between the Russian and the French communist parties have been practically ruined. The reason of the conflict lies in the negative attitude which the leader of the Russian communists, Gennady Zyuganov, expressed against the recent gay pride parade in Moscow. 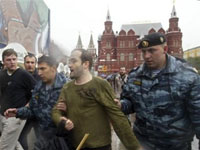 The outcome of the “free love parade” in Moscow is history now. Young communists and patriots violently attacked the homosexuals and defamed them. Delegates of the French Communist Party, who took part in all events organized by the Moscow gay movement, did not hesitate to express their reaction to that.

The French communists harshly reproached their Russian colleagues of being homophobic and betraying the Marxism-Leninism ideology. The Socialistic Party of France (the country’s second largest party) supported the communists of France too.

Unlike for the Communist Party of the Russian Federation, the struggle for social justice implies the protection of class interests, as well as people’s rights and freedoms, including the right to choose a sexual orientation.

Another spokesman for the French communist party said that the CPRF was a non-communist party, which still had the communist rhetoric, but betrayed the ideals of Marxism.

“The French comrades” also criticized Russia’s communists for their aspiration to form the real opposition in Russia. “The Russian Communist Party has actually been the government of the country for almost 80 years. Therefore, they simply do not know what it means to be a real opposition. They think of themselves as the opposition, but they do nothing that an opposition organization would do. It’s all about declarations, that’s all,” Sanchez said. Richard Sanchez thinks that Russia needs to have the real leftist movement, but not the CPRF which views itself as an opposition organization.

The Communist Party of France harshly criticized the long-standing leader of the Russian Communist movement, Gennady Zyuganov. “Many in Europe think that he personifies the communist party of the Stalin regime. It is very good for the CRPF’s opponents to have Zyuganov in the office as long as possible. As long as such political adversaries exist, everyone can live at their ease,” a FCP member said.

The standstill in the Russian communist movement, as FCP believes, has been caused because of the isolationist and totalitarian stance of its leadership. “Russian Communist Party may have its future only if new people join it, the people of the new generation. The leadership needs to be changed. We hope thatyoung people will comeand jointheCPRF in order to change the party from within. Zyuganov must go and make way for young people. However, he will keep the power in his hands until a strong movement stands up against him,” Sanchez emphasized.

Furthermore, spokespeople for the French communist organization were shocked to know that the leaders of the Russian Communist Party actively cooperate with Neo-fascists and nationalists. “Their contacts with fascist-oriented organizations discredit the party in the eyes of all European communists. It is a grand shame. However, the Russian communists dare to blame us for the betrayal of the communist ideas,” one of the FCP delegates said.

Despite such a complicated situation, the FCP spokespeople stated that the parties could still continue to cooperate. However, “this cooperation could only be possible  when the CPRF has the people who defend liberal values and freedoms.” For the time being, the leadership of the French Communist Party can only criticize the CPRF for its homophobic views.

The leader of the Communist Party of the Russian Federation, Gennady Zyuganov publicly condemned the initiative to hold a gay pride parade in Moscow. He stated that it was an “unhealthy” idea and refused to comment the critical position of his French colleagues. Zyuganov’s press secretary Alexander Yushchenko expressed his boss’s attitude on the matter anyway: “The French communists can support whoever they want there in France: either homosexuals or onanists,” said he.

The remarks from Zyuganov’s deputy, Ivan Melnikov, were clearer. The official said that Russia was a country of firm traditions. "Moscow is not Berlin or Paris. Any displays of unconventional sexual orientation look revolting in Russia. The gay parade was originally initiated by a small group of people. They were interested in their own promotion. They probably worked someone’s investment too,” Ivan Melnikov said.

As it can be seen, the leadership of the Russian Communist party decided to ignore the criticism of their French comrades. At least, they tried not to take the incident too seriously.

It is not ruled out that the Central Committee of the French Communist Party may write an open letter to the leadership of their Russian  communist organization. The French communists may want to cease all contacts and relations with Russia. The FCP is the stronghold of European communist movement, which means that the conflict may bring serious trouble for the CPRF. It may become a party in disgrace, while the West may finally be convinced of the anti-communist essence of the Russian Communist Party and its leader Gennady Zyuganov.