The British automobile company MG Rover, which is currently experiencing a financial collapse, might become the property of a Russian businessman in the near future. It is not ruled out that MG Rover's new owner will be the company Ruspromavto, owned by oligarch Oleg Deripaska. 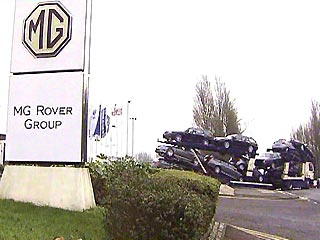 Alexander Yushkevich, the chairman of Ruspromavto's board of directors, said that such an acquisition should fit the development strategy for the Russian company, which had not yet considered the possibility to buy the British car maker. The asset is very attractive for the Russian company in theory. “MG Rover has a range of very interesting models – the 35th, 45th, 75th. There are a lot more of them in Russia in comparison with Italy's Fiat, for example,” Alexander Yushkevich said.

Potential investors will make the final decision after the financial evaluation of the collapsing British maker. It is noteworthy that the process may take about a year.

The  idea to make a British car maker the property of a Russian company did not turn out to be unreal. The majority of Russian businessmen are not interested in MG Rover. Russian oligarchs, though, have a special interest in foreign cars. “Rover is an interesting brand, and it does not cost a lot right now. It might be an interesting offer for Oleg Deripaska, for example, who controls the GAZ  company (Russian car maker),” banker Alexander Gafin said.

Analysts have not come to any conclusion yet in their evaluations of the bankrupt British company. Alexander Yushkevich of Ruspromavto believes that the decision will depend on a variety of factors. “Will the company be put up for auction with its debts or will it be divided into separate assets? How heavy will the debt burden of the company be? Will the company's team of managers and engineers stay or will they quit? It will probably take a year to find answers to all those questions,” Yushkevich said.

If Russian businessmen eventually decide to acquire MG Rover, it will become another transaction, in which a Russian citizen becomes an owner of a foreign car maker. Nikolai Smolenski, 23, the son of a well-known Russian banker, acquired the British sports car maker TVR in July of 2004. The factory reportedly cost the enterprising young man $50 million.

At the end of 2003 the Russian steel-making enterprise Severstal, owned by Aleksei Mordashov (the person, who ranks 7th on the list of Russia's richest men, and owns the 5.1-billion-dollar fortune) purchased the Detroit-based Rouge Industries for $280 million.

It is noteworthy that Roman Abramovich's acquisition of football club Chelsea became the most well-known investment of a Russian citizen in foreign business (Abramovich owns $14.7 billion, according to Forbes magazine). A football club, however, associates with an expensive toy, an entertainment for the businessmen, rather than with a business investment. The purchase of MG Rover could probably have a much bigger response in business circles of the West.