Digital television to hit Russia only in 10 years 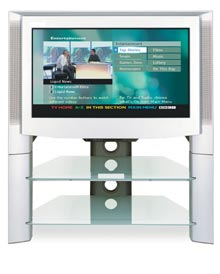 In Russia, with its geographical and territorial peculiarities, satellite television is a convenient way for introduction of digital television. Deputy Minister for Information Technologies and Communications Boris Antonyuk said at one of the sessions of the Federation Council's Commission for information policy that the federal TV channels would become digital satellite broadcasting in 2005. The satellite group transmitting the signal all over the country will be upgraded in 2006. Since 2007, TV sets receiving analog and digital signals (together with setting of required equipment) will come into the RF market. Boris Antonyuk hopes this will help stimulate development of the electronic industry in this country. In six years, half of Russians will have digital TV sets and the analog television will become obsolete in Russia by 2016, the deputy minister for information technologies and communications said. It is expected that introduction of digital television in the world will be completed by 2028-2030. It is believed that analog television will become obsolete if 85 per cent of the population already has digital TV sets. The Russian Government will consider a program for switching to digital television this year.

Boris Antonyuk says that Russia is working on digital broadcasting standards; Moscow, St.Petesrburg and Nizhny Novgorod are the territories where experimental digital television is already broadcast. It is planned that owners of digital TV sets will get their decoders for free. Internet, on-line TV and video orders will be a paid service. Digital television programs will be paid either. Indeed, prospective digital television will offer as wider range of channels and programs as commercial satellite television operators do today. It is not yet decided what the payment may be. It is important to make this payment affordable for majority of the Russian population no matter where they live and how much they earn, governmental officials say.