The Russian media are actively discussing yesterday’s decision made by President Putin. Putin ordered to move the planned pipeline East Siberia -The Pacific farther from Lake Baikal. The new itinerary for the pipeline has not been approved yet. 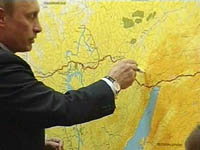 The Director of Russia’s oil giant Transneft, Semyon Vainshtok, was shocked with Putin’s decision. Vainshtok said that it would take the company 45 days to count the cost of the ‘squiggle’ around Baikal. Independent experts say, though, that the oil company will have to spend up to one billion dollars on additional construction while the cost of the entire project of the pipeline totals $11 billion.

The current route has two alternatives. Irina Maksimova, one of the experts of the above-mentioned Siberian pipeline project, said that one of the two variants is $600 million cheaper than the other one, although the pipe itself will be 50 kilometers longer. The second alternative stipulates the construction of the pipeline that will be 120 kilometers longer. The cost of the second project has not been calculated yet.

Scientists of politics say that the cost of the pipeline does not make the essence of the current dispute. Analyst Aleksei Kara-Murza believes that it is a matter of standoff between bureaucrats and the general public. The president, the scientist believes, is playing the role of a person who destroys bureaucratic agreements and lobbyism at the last minute. “The president has taken the side of the general public so to speak,” the scientist of politics said.

Minister for Industry and Energy Viktor Khristenko said in an interview with the Vremya Novostei newspaper that it would take about nine months to reorganize the whole project.

The East Siberia -The Pacific oil pipeline is said to transport 80 million tons of oil a year. The pipe will be over 4,000 kilometers long. It was originally planned to lay the pipeline at the distance of 800 meters from the northern lakeside of Baikal. Ecologists considered this aspect of the project absolutely unacceptable.

When the head of oil giant Transneft delivered the optimistic report on the Siberian pipeline to the president, Putin wondered how far the pipeline would be placed from the shore. When Semyon Vainshtok said that the pipe would be built only 800 meters from the lakeside, Putin asked Tansneft’s director about a technical opportunity to move the pipeline farther from the lake.

Vladimir Putin and Semyon Vainshtok were arguing about the route of the Siberian pipeline together in front of the map of Siberia. Putin was winning the argument when academician Nikolai Laverov said that placing the pipeline close to Lake Baikal would entail a possibility of a serious ecological disaster. “Seismologists say the pipe should be moved away from the lake due to possible landslides and minor earthquakes,” the academician concluded.

As a result, Putin offered to launch the construction of the pipeline and to continue developing the new route to avoid the pollution of the purest and the deepest lake in the world. “The pipeline must be moved farther north than originally planned. This is what we have agreed upon now,” resolutely concluded Putin.

Semyon Vainshtok, the director of Transneft, made another attempt to defend his project, but the president did not let him even finish the sentence: “If we want to think about future generations, we mustn’t minimize dangers but exclude them,” Putin said.

When the meeting was over, Mr. Vainshtok was sitting having put his head in his hands. He told reporters afterwards that it was a remarkable decision that the president made. “ I am a soldier. The president is the Commander-in-Chief. His orders are not to be discussed,” Vainshtok uttered.