Our missile engineers have finally come to the fore once again. On Saturday an intercontinental ballistic missile was launched from Kapustin Yar test-site in the Astrakhan region, and just a few minutes later successfully hit its target at the Sary-Shagan test-site in Kazakhstan. 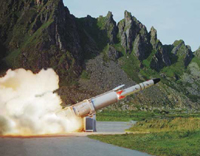 It would have been impossible to tell whether this was a new or old missile from its flight, because the very latest warhead for the ‘Bulava’ sea-based missile complex had been placed on an old K65M-P carrier produced in the 1960s. It was this new “head” that was the subject of the tests carried out by missile engineers. The launch of this missile can be seen as our reply to the Americans who have started to afford themselves statements along the lines that there is no nuclear parity anymore, and Russia can be written off on a strategic level. They wish….

They prepared especially thoroughly for this launch – nowadays the military unfortunately does not often need to test new warheads. In addition the high command was in charge of the launch: before the tests got underway two helicopters landed on the test site, out of which came the Deputy Minister of Defense Aleksandr Belousov, Commanding officer for Strategic Missile Troops General-Colonel Nikolay Solovtsov and even the head financial coordinator for the Minsitry of Defense Lyubov Kudelina (money apparently played a major role in these tests).

Admittedly the honourable guests did not see the colourful lift-off – because of the vagaries of the weather it had to put back by almost a day. The superiors could not wait around for it.

In reality, the bad weather would not have been a problem for either the missile or its new ‘head’. But the quite unique, very accurate measuring equipment which only exists on this test-site could “be struck blind” in stormy conditions. For that reason they decided not to risk it and possibly waste money. Furthermore they had to wait until they could be sure that during the launch and flight of the missile, no American surveillance satellites, which fly over Kapustin Yar several times a day, happened to be in the area, where they could observe the tests.

In the end, when all these conditions coincided (this happened by Saturday evening), the missile-carrier launched successfully. The measuring equipment precisely recorded that the new warhead successfully broke through the nominal anti-missile defense of the enemy.

Incidentally, for reference: from this test site the first Soviet ballistic missile ‘R-1’ was launched in October 1947,. the dogs Dezik and Gypsy flew into space in 1951 and now we have the latest innovation in the Russian “Bulava” nuclear shield.