The rate of the American currency is sliding on the world markets again. The USD has dropped against the euro, the English pound, the Swiss frank, the Japanese yen and the Russian ruble. Yet another reduction of the US dollar rate occurred because of the decision of the South Korean Central Bank to convert a part of its dollar reserves into euros. 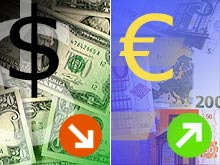 The Central Bank of Korea announced the decision to diversify its gold and forex reserves on February 22nd. Money profiteers estimated the statement as Seoul's aspiration to transform a part of its assets (totaling $200 billion) into other means of payments, the euro, first and foremost. The dollar lost over 1.5 percent of its cost as a result of the subsequent tender and dropped to the level of $1,322 dollars per euro.

Some analysts still believe that the reduction of the dollar is still good for the American economy. The growing euro has already created serious problems for the European export as it cut the competitive ability of the goods on the world market. The expensive euro has exerted a very negative influence on the economic growth in the eurozone. Analysts believe that the economic growth may stop in the EU if the euro rate exceeds the level of $1.4 per euro.

Nevertheless, it is only one side of the medal. Speculating for the fall is a dangerous occupation indeed. On the one hand, a weak national currency improves the competitive ability on foreign markets. On the other hand, it decreases the purchasing capacity of the population. More importantly, one should not forget that the US dollar is still the international means of payment. The devaluation of the dollar may automatically result in the outflow of all dollars to their issuer – the USA. Such a turn of events will lead to a global economic catastrophe.

It seems that foreign specialists are currently considering the same issue too. Well-known financier George Soros has recently accused Russia and other oil-exporting states of causing deliberate damage to the American currency. Soros believes that oil exporters are converting their dollars into other currencies, presumably the euro, speculating for the fall of the American currency.

Such an acknowledgement of the Russian economic power would be flattering, of course. However, Mr. Soros exaggerated Russian oil-exporting opportunities. The real reason is to be found in the USA itself. Here is one example. George W. Bush sent the federal budget plan for the 2006 financial year to the US Congress in the beginning of February. According to the White House, the $2.57 trillion budget is supposed to contain the all-time high deficit of $427 billion. In other words, the most economically strongest country turns out to be the largest debtor too. Therefore, other countries will not be willing to continue saving their assets only in US dollars. The Central Bank of Russia, for example, has repeatedly announced its intention to cut the dollar constituent of its assets and acquire more euros.  Now it is Bahrain that is following the example of South Korea, pondering on the same question.

It goes without saying that no one is interested in the sudden demise of the US dollar: it would crash not only the American, but the global economy too. However, it will be rather hard for old EU members to resist the temptation of moving the dollar aside on the pedestal of the international means of payment and placing the euro on it instead.