Mikhail Gorbachev, the first and the last president of the USSR, harshly criticized Vladimir Putin at a press conference on Tuesday. Words of criticism from Mr. Gorbachev became quite a surprise for the Russian society, for the ex-Soviet president was known for his positive attitude to Putin's policy. 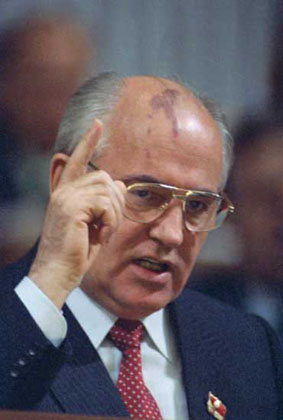 The former leader of the Soviet Union stated during the press conference on February 1st that Putin does not justify people's hopes. “Putin managed to bring stability to the country and improve the governing capacity, which made it possible to open the perspective for the program that he was talking about. Now we can see that it is all being frustrated,” Mikhail Gorbachev complained.

To exemplify his point, Gorbachev referred to the law about the elimination of state benefits: “Law-makers did not think about people, when they were discussing the law. Public organizations, science – everything has been left aside. In my opinion, such an approach to elderly people can evoke only indignation for normal people,” Mikhail Gorbachev believes.

Such statements would be absolutely normal and even mild for the majority of Russian politicians. Gorbachev, however, became of one Putin's most ardent followers since the moment, when the latter became the elected president of Russia. Mikhail Gorbachev still enjoys great popularity in the West, although one cannot say the same about his reputation in Russia. He is reputed to be the person, who destroyed the Soviet Union. That is why such anti-Putin comments from the former leader of the USSR seem to be more than strange to the majority of Russians. It is noteworthy that Gorbachev has not blamed Putin for the failure with the law about welfare benefit cutoffs – he only referred to law-makers. However, a statement about a “bad team” may soon be followed with a statement about a bad “tsar,” who either turns a blind eye on his team's drawbacks, or agrees with everything that they do, the Kommersant newspaper wrote.

Gorbachev's attitude to Putin was absolutely different a year ago, though. “Putin's second term will be decisive. If it is successful, the question to prolong Putin's stay at power is likely to arise. One may find an opportunity to run for the third term or find other variants,” Mikhail Gorbachev said in December of 2003.