Putin reveals his preference for presidential candidates in Ukraine

President Vladimir Putin is currently on a work visit to Ukraine. The visit is timed to celebrate 60 years since the liberation of the republic from the German occupation. However, the Russian president visited Ukraine several days before the presidential election, which stirred up rumors about Putin's political preferences. 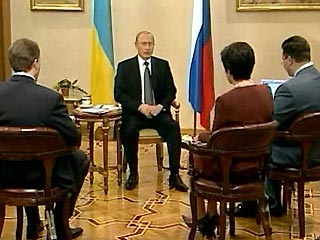 Vladimir Putin appeared on the national Ukrainian television. The president managed to answer 33 questions from TV viewers and journalists. Some answers from the Russian president became quite surprising. Particularly, Putin stated that Ukrainians would be allowed to enter Russia with their home passports only from 1 January, 2005 (a special inlay would be necessary, though). In addition, Putin set forth a suggestion to introduce dual citizenships for Russia, Belarus and Ukraine. The Russian president was very surprised to learn that visitors have only 90 to organize their registration in Ukraine, while this period counts only three days in Russia.

Answering a question about the joint economic space, Putin noted that the issue was not about the retrieval of the USSR: “Nobody is recreating any USSRs. Such an attempt, unfortunately, would not bring any results,” Putin said. According to the Russian leader, the free circulation of goods and services should become the central question in the creation of the joint economic space. “The conception of the joint economic space is aimed at free circulation of labor force, capitals, goods and services, the creation of economic conditions for efficient development; we need to relieve our economics of red tape, give our citizens a possibility to communicate freely,” Putin stated.

Vladimir Putin did not specify which political forces of Ukraine he supports. The president answered that he had a neutral position on the matter. However, Putin dropped a hint about it, when he said that Viktor Yanukovich's government (one of the main candidates to take the office of the Ukrainian president) was quite successful in its work, which let the country achieve a 13.5-percent economic growth.

”The government of Viktor Yanukovich has managed to accomplish even more. They made it a good-quality growth, they created the economy of different directions. This is an example to follow,” Putin stated. The Russian president urged Ukrainians to come to the polls: “If you do not elect, someone will elect for you. I am 100 percent sure that you should support the candidate you sympathize with,” said he.

Putin was also asked, if he was going to run for the third term. The answer was negative: “Stability is the most important issue for Russia. It is possible to achieve it, if one observes the Constitution, which stipulates only two presidential terms. I will use it as a guideline,” the president said.

The funniest question asked during the TV interview was about the Russian ambassador to Ukraine, Viktor Chernomirdin. A TV viewer wondered why Chernomirdin had not learned the Ukrainian language yet. Putin was rather honest in his answer to this question. The president said that Viktor Chernomirdin was not good at foreign languages, although he had lots of other advantages, Putin added.

It took Vladimir Putin 58 minutes to answer all questions. The end of the interview with the Russian president coincided with fireworks above the Independence Square in Kiev to celebrate 60 years of Ukraine's liberation from fascism.

It is noteworthy that the call center “Vladimir Putin – on the air” received over 136 thousand questions from people. Residents of Kiev and the Kiev region asked the largest number of questions. People were mostly interested in the relations between Ukraine and Russia. A lot of questions touched upon the issues of the forthcoming elections in Ukraine too.