The real state of things does not match Putin's words

It has been a year now since the arrest of Mikhail Khodorkovsky, Yukos's CEO. The misfortune of one of the nation's richest men has never been either his personal matter or just a page in the never-ending business arguments in post-Soviet Russia. Russian politicians, experts and even certain figures of President Putin's team prefer to characterize Khodorkovsky's arrest as the starting point of most important changes in Russia since the beginning of the 1990s. The most important political result of the past year is as follows: business is pulling out from politics, and politics is coming into the world of business. 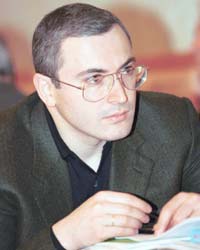 While Khodorkovsky was staying in jail, Russia held parliamentary elections, which changed the organization of the State Duma, and the presidential election, which let Putin stay in the office for another four years. New variants of the laws about referendums, meetings and demonstrations were approved. Russian ministers were allowed to become party leaders. The talks about the strengthening of the vertical of power led to the reform of the entire electoral system. Apparently, the Kremlin will carry out its plans: the country will practice the proportional electoral system, governors and city mayors will be appointed, not elected.

”Russian businessmen attempted to change the Russian constitution and organize the parliament according to their liking; they bribed numerous deputies and even whole parties. The government of a foreign country would never allow such things to happen! Khodorkovsky, however, was doing all those things. That is why he has to pay for it now,” an analyst close to the Kremlin administration said.

The case of Yukos on the whole and of Mikhail Khodorkovsky in particular is a solely economic matter. It is a court subject, not a political issue. The Kremlin has been sticking to this stance for a year already.

“The state is not interested in the bankruptcy of the company,” President Putin said a couple of months ago. He continued that the court would be up for the court to decide the fate of the oil giant. Thus, Yukos's case became the demonstration of the power of the legal system. The real action did not match the president's words. More or less sincere stories told by high-ranking officials contained the following idea: Putin did not insist on the arrest of Mikhail Khodorkovsky; he simply did not stop the prosecutor general from doing it. A lot of experts thought that Yukos's CEO would be released after the presidential election, although they thought it wrong. The situation will become clear only when the new owner of the company's assets will be unveiled to the world.

Governmental officials have released numerous statements, which sent Yukos's shares and the whole stock market to the bottom. According to experts' opinion, a certain group of people knows what officials are going to say about the company in advance. They use this information to gain considerable profit from Yukos's stocks. There have been several of such occurrences. The Court of Arbitration withdrew the arrest from the shares of Yukos's central branch company, Yuganskneftegaz, in the beginning of August, as the court officers violated the process of the executive proceedings. The court unveiled its decision on Friday, when the tender was already closed. Well-informed market members managed to make really good money, when Yukos's shares sky-rocketed on Monday morning. The DrKW bank exposed its evaluation of Yuganskneftegaz almost two weeks ago – Yukos's shares went up again. An anonymous source in the government said that the price to sell the main oil-extracting asset of the company would be equal to its debt – only $3.73 billion. The market collapsed again.

Khodorkovsky's case does make a great importance for common Russians. Only one percent of Russians said that they remembered the public statements that Mikhail Khodorkovsky released for the press during the recent year. According to opinion polls, only eleven percent of Russian people follow the development of the litigation.

The oil tycoon attempted to return to politics from behind the bars of his prison cell. One of Russian newspapers published an article in the beginning of April, devoted to the crisis of liberalism in Russia. The article said that Russian liberals did not manage to avoid the crisis. In addition, the communist party was suffering from the lack of ideas, other political parties complained of intellectual difficulties too.

Russia will hold the new presidential election in several years. “Who is going to be next?” will become the most popular question. It will be the time of intricate unions and strange agreements – intellect will be in greater demand as opposed to money. It seems that Khodorkovsky does not have a problem with his head at this point.