Protests in Russia not going to fade

Recent protests in Moscow exposed the problem of deep contradictions between the authorities and citizens. The rally on Sakharov Avenue on August 10 became the largest in Moscow in the past seven years. According to unconfirmed reports, as many as 50-60 thousand people took part in the rally. 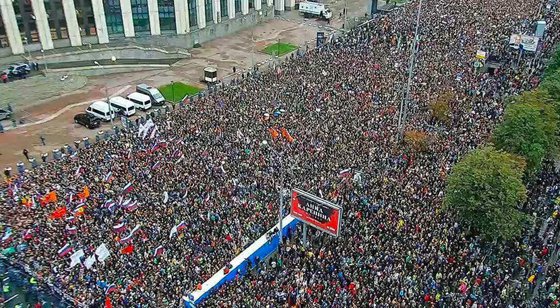 Moscow has seen four actions of protest during the last few weeks. The rallies were held in support of the candidates withdrawn from elections to the Moscow City Duma. Three of those rallies (on July 14 and 27 and on August 3) were unauthorized, while the third one, which was coordinated with the authorities, (on July 20) gathered about 22,500 people.

Most recently, candidates served administrative arrests for organising uncoordinated events. Famous journalists, bloggers and musicians also took part in the acts. According to journalist Leonid Parfenov, "the latest campaign has revealed so many lies and so much ensued violence that the Moscow City Duma elections were no longer the reason."

The organizers of the action also said that the mayor's office tried to correct the list of speakers by banning music performances before the event.

There were calls made to "take a walk" to the presidential administration after the rally. Boris Zolotarevsky, an employee of the Anti-Corruption Fund, as well as several other people who reached the Kitai-Gorod metro station, were arrested. It was later said that there were 256 people detained on August 10. With regard to third-party damage, Moscow's transport and road services evaluated the damage at 100 million rubles. It is worthy of note that participants of the riots on Bolotnaya Square in 2012 were also accused of causing damage to city infrastructure objects.

For the time being, Moscow protests do not show influence on the domestic political situation in general. Fitch experts, reasoning the upgrade of Russia's rating from BBB- to BBB, noted that increased public activity and willingness to protests remained localized. The protests did not lead to the formation of the national political opposition movement, nor did they strengthen the existing opposition movement in Russia.

Political scientist Mikhail Vinogradov named three components of protests: the resuscitation of Bolotnaya as a broad movement, the explicit radicalization of the actions of the authorities, and the escalation of the feeling of disappointment among the younger generation. Political strategist Sergei Polyakov believes that the protest sentiments in Russia are not going to fade, because Russian people can no longer recklessly trust the president. They want to participate in the decision-making process. For most people, the decision to deny registrations for candidates came as denial of people's right to be heard.