Viktor Zolotov, the chief of the Russian National Guards (Federal National Guard Troops Service), published a video address to opposition activist Alexei Navalny. In his address, Zolotov called Navalny out in a duel and promised to make a "juicy meat chop" out of him. The video comes as Zolotov's reaction to the recent investigation conducted by Navalny's Anti-Corruption Foundation (FBK) into the procurement of foodstuffs for the Russian National Guards at inflated prices. 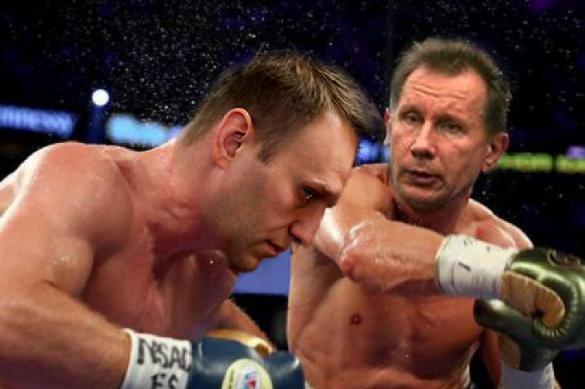 "With respect to me, you had insulting, slanderous reflections, and it's not customary for army officers to forgive that," Zolotov said in the video message posted on the YouTube channel of the Russian National Guards on September 11. "From time immemorial, the scoundrel would be punched in the face and summoned to a duel," he added.

"Mr. Navalny, no one stops us from returning at least part of those traditions, I mean demanding satisfaction, I simply challenge you to a duel - to a ring, tatami, you name it, where I promise to make a fine, juicy meat chop out of you," Viktor Zolotov said sitting in front of the camera. It is worthy of note that Zolotov had earlier served as a security guard for President Putin.

Zolotov also promised to trample on Navalny and use him as a door mat. "If, Mr. Navalny, you ever again speak in an insulting or slanderous tone about me or my family members, I promise you that before I step over you and use you as a door mat, I will arrange a show for the entire staff of the National Guards," said Zolotov.

It is worthy of note that Viktor Zolotov challenged Navalny at a time when the latter is serving his 30-day arrest in Moscow and has no way to respond.

In his video address, the director of the Russian National Guards recalled another investigation conducted by Navalny's Anti-Corruption Fund  - about the property of Zolotov's family. The report, published in 2016, evaluated Viktor Zolotov's property at 663 million rubles.

"I'm not a poor man indeed. Unlike you, when you were just learning to sit down on a pot, I had served in the army, worked at a factory production, was, by the way, an outstanding communist worker, and later engaged in business activities," the military man said.

We would like to note here that Alexei Navalny's team continues investigating into a variety of "corruption schemes", while all of those investigations have a zero degree of effectiveness. Navalny's Anti-Corruption Fund had conducted investigations into "cases" of Dmitry Medvedev, Yuri Kovalchuk, Igor Shuvalov, Igor Sechin, Vyacheslav Volodin, Alisher Usmanov and others. Many of them sued Navalny and won the trials. Mr. Zolotov could follow in their footsteps and do the same.

It appears that someone at the top let Alexei Navalny become such a principled oppositionist to release the steam of people's discontent. Navalny himself profits from creating his image of a person, who unmasks others. In fact, however, he is a competent narrator of "scary" stories, a populariser, who wants to be the leader of Russia's opposition, if not president.

Many in Russia found Viktor Zolotov's address to Navalny ridiculous. "We have no doubt about the wonderful physical shape of Mr. Zolotov, but we do have doubt of whether he is a man of a high intellectual level," bloggers write on social media.