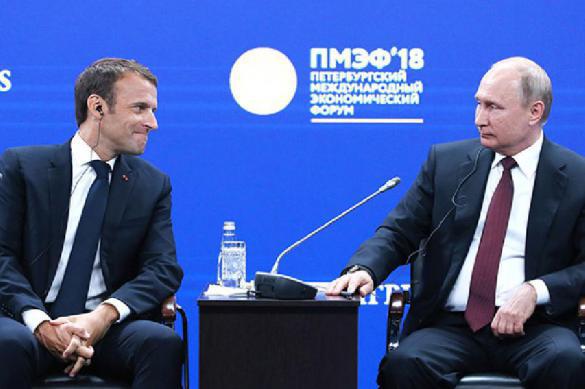 During his welcoming speech, President Putin said that such meetings, which have already become traditional events held in a very friendly and warm atmosphere, are especially important now, against the background of highly intense international relations.

"Such a discussion, informal dialogue is especially important today, when the system of international political, economic and trade relations is undergoing a serious test of durability. Conditions for doing business, the share of investments, and everyday life are changing dynamically," Putin said.

Until recently, he said, the core of the world economy was based on two most important principles. "First off, it is the freedom of entrepreneurship, trade and investment - an integral part of the rules in international relations. Secondly, it is sustainability and predictability of these rules, secured by legal mechanism. However, today we are witnessing not just erosion, but the demolition of these grounds. This system is breaking down. Today's rule is to violate rules. One thing is clear: violations have become an official tool for many countries, and many countries are forced to take mirror measures and adapt themselves," Putin said.

"Today, it is impossible to agree even on symbolic steps in the world economy. The era of global "free trade" is coming to an end. Today, it goes about a new version of protectionism. Protectionist measures and trade restrictions are taken under the guise of national security references. The twisted spiral of sanctions and restrictions continues spiralling further, affecting an increasing number of countries and companies, including those that were certain that the regime of trade restrictions will never affect them. Yet, arbitrariness and lack of control inevitably leads to the temptation of using instruments of restriction again and again, broader and broader, to the right and to the left, at any occasion, regardless of all talks about political loyalty, solidarity, previous agreements and long-term cooperative ties. On a global scale, such behaviour of centres of power is fraught with negative, if not catastrophic, consequences. This confluence of factors may lead to a global systemic crisis, which humanity has never encountered yet.

"Such a system of global mistrust may take the world market to a state of subsistence economy. Rules should be uniform and transparent and legitimate for all players of the world market. We do not need trade wars today, we need full-fledged trade peace. It is important to maintain respect for each other: Russia stands for freedom of trade and world integration, for free dialogue on the way to development. We encourage our partners from Europe, America, Asia and other regions of the world to move together towards sustainable development," Putin said.

French President Emmanuel Macron spoke next. Macron supported Vladimir Putin's initiatives and  called to be even more flexible and bolder in economic cooperation. He quoted a few excerpts from "War and Peace," and then stated that "in France courage returned to us in our minds. Let us be as flexible as in judo. We need to fight what Solzhenitsyn called the dawn of boldness ... one must be brave!" Macron said.

Japanese Prime Minister Shinzo Abe was more reserved, but more specific. He spoke in favour of Japan's participation in the project of creating a transport infrastructure for the delivery of Russian liquified natural gas to Asian markets via the Sea of Japan. He also made a subtle allusion to the issue of the Kuril Islands dispute.  Abe ended his speech by saying that Asia should become a peaceful, prosperous and developing region, noting that one needs to address the North Korean question accordingly.

Vice Chairman of the People's Republic of China, Wang Qishan, also devoted his speech to the "economy of trust." "One needs to respect each other to create the atmosphere of trust," Mr. Qishan said. He strongly condemned the "baton of sanctions", because such a policy poses a threat to the global market.

The head of the IMF, Christine Lagarde, also said that the rules and transparency of trade and economy were indeed in jeopardy.  She said that Russia was coping with difficulties and achieved an incredible breakthrough. However, she called for greater integration of Russia into the world economy and said that Russia needs to abandon the "raw material economic model". Christine Lagarde also spoke about the danger of globalisation and said that it was not a fair process at all times. That was an unprecedented statement for the head of the IMF to make.