Why do Putin and Poroshenko hold secret phone talks?

The media interpretation of the remarks by Putin's official spokesman Dmitry Peskov about the contacts between Russian and Ukrainian presidents was incorrect. 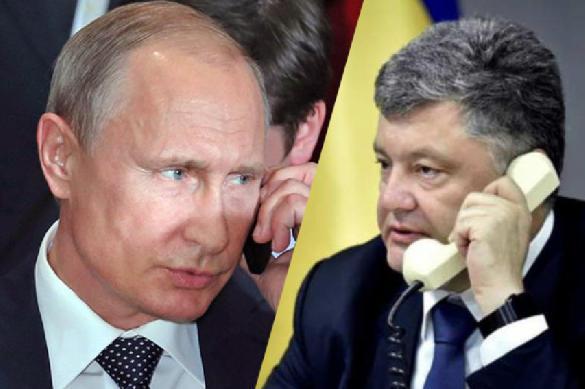 In this regard, Peskov stressed that "no one said anything about any meetings." During the interview, a journalist wondered about the time of the most recent meeting between the two presidents recalling such "contacts from last year, when the press was notified about them several months afterwards."

According to Peskov, "President Putin has a huge number of meetings and contacts that are not of public nature. "We do not report anything about those meetings, and this is common practice. The president's working day ... is much busier than one can see it on television. Indeed, there are meetings about which we do not inform the press," Peskov said.

The Ukrainian side has already announced that President Poroshenko did not hold bilateral meetings with his Russian counterpart Vladimir Putin after the conclusion of the Minsk agreements. However, not so long ago, President of Kazakhstan Nursultan Nazarbayev, who earlier became the main mediator in Erdoğan's apologies to Putin, said that Poroshenko had asked him [the Kazakh president] for help in finding a compromise with Russia.

After attempts to commit subversive activities in the Crimea, Russian President Putin stated that  Ukraine had "crossed the line" and "proceeded to terror" adding that the Norman format meeting in China was not going to take place. Poroshenko was reportedly begged the Chinese side to find an opportunity for his arrival at the G20 summit, although to no avail.

It was also reported that Poroshenko and Putin conduct secret telephone conversations. The Security Bureau of Ukraine supposedly classifies those talks not to cast any suspicion on the Ukrainian president. It was in particular said that the two presidents talked to each other on the phone in April. "The presidents would periodically switch to irony not to quarrel with each other," a source from the Ukrainian administration said.