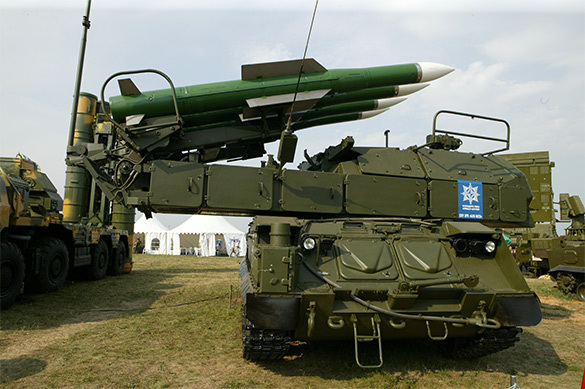 Russia represents more than 160 models of weapons and military hardware. According to Denisov, "Russia's Latin American friends" are greatly interested in Russian aircraft and helicopters, as well as in air defence equipment and equipment for ground forces.

At an arms show in Mexico, Russia showcased Pantsir-S1 anti-aircraft missile system, BTR-80A/82A armoured personnel carrier, Tiger-M and Ural vehicles, as well as small arms and other products of the defence industry.

Pravda.Ru asked Andrei Frolov, editor-in-chief of Export of Arms magazine to comment on the prospects of cooperation between Russia and Latin American countries.

"Latin American countries do not purchase assault weapons from Russia. They do not purchase tactical missiles and bomber aircraft either. Venezuela is a special case at this point. During the presidency of Hugo Chavez, Russia signed many contracts with Venezuela. Venezuela used to buy offensive weapons from Russia. Those were Su-30 fighter jets, multiple-launch rocket systems, artillery systems, air defence systems. Venezuela is still Russia's biggest customer in Latin America in the post-Soviet period. Unfortunately, Venezuela has not been buying much from Russia lately - the country currently repairs what we have supplied there before.

"In general, Russia supplies transport helicopters of the Mi-17 family, combat helicopters Mi-35, ground troops hardware (tanks) and portable anti-aircraft missile systems Igla to the region. Unfortunately, Russia has not signed a contract with Brazil yet for the delivery of "Pantsir" anti-aircraft systems. This year, it was rumoured that Argentina was intended to send us an inquiry for the purchase of MiG-29 fighters. Cuba does not buy anything from Russia now either."

"Who is Moscow's main competitor in the field of military-technical cooperation on the Latin American market?"

"They are the same countries as on other markets: the US, France and China."

"What competitive advantages does the Russian military equipment have?"

"First of all, Russian military equipment is known in many countries around the world. Secondly, it is reliable and relatively cheap. Thirdly, Russia is ready to discuss various means of payment, including loans. To crown it all, Russia's customers are satisfied with technical characteristics of our products."

"Does Russia provide technical support for its equipment in Latin American countries?"

"Yes. For example, Russian Helicopters will have a service centre in Brazil. Sometimes, as in the case of Venezuela, Russia repairs military hardware and aircraft in Russia."

"With which countries of Latin America does Russia conduct most dynamic cooperation?"

"It used to be Venezuela. Now, unfortunately, Venezuela does not purchase new weapons. Nicaragua and Brazil are active partners. Argentina is a regular customer as well. Mexico is on the list of our customers, but this country does not buy much."