Russia's 'Father Of All Bombs' can make USA's 'mother' blush

The use of the most powerful Massive Ordnance Air Blast Bomb (MOAB) GBU-43/B against Islamic State fighters (the terrorist organisation is banned in Russia) in Afghanistan has generated many discussions, in which people compare US and Russian weapons. Some people believe that Russia wins the competition, whereas the USA should have advertised their "mother of all bombs" before using it, to create a greater effect from the bombing. 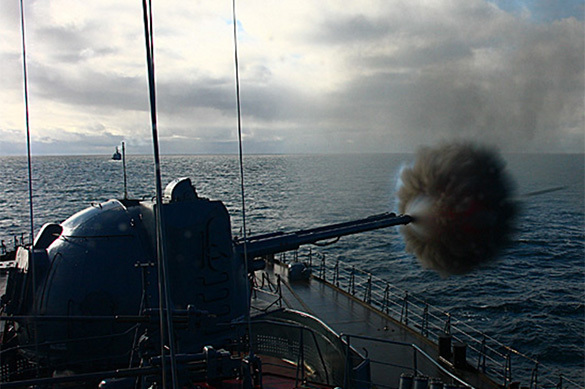 According to naked facts, the US attack on Afghanistan has killed 36 militants, destroyed ammo warehouses, military equipment and several underground tunnels. US President Donald Trump called the operation "a very successful mission" of the US Armed Forces.

An analysis of the results of the first combat use of the most powerful non-nuclear bomb of the United States shows that the Russian Armed Forces have a similar, albeit a much more powerful weapon. According to the National Interest, despite a smaller mass of the explosive, Russia's fuel-air explosion aircraft bomb known for the Russian initials as ODAB surpasses the USA's MOAB. The capacity of the explosive is approximately 40 tons in TNT, which is approximately four times larger than that of the GBU-43. Moreover, in terms of the guaranteed destruction radius, the Russian "father" surpasses the American "mother" twice. The temperature in the epicentre of the explosion of the Russian bomb is twice as high. To crown it all, the Russian bomb outstrips the American one 20 times in terms of the total area of damage.

Spokespeople for the Russian General Staff, commenting on the tests of the ODAB bomb said that the destructive power of Russia's most powerful non-nuclear bomb was comparable to that of a nuclear bomb. Unlike a nuclear bomb, however, the ODAB does not harm the environment.

The nose part of the bomb houses a complex electromechanical device that sprays explosives after the bomb is released. The resulting aerosol is then transformed into gas-air mixture, which the fuze subsequently explodes. The ODAB produces a shock wave with an excess pressure of about 3000 kPa (30 kgf/cm), thus creating an vacuum environment in the epicentre of the explosion. The pressure drop literally tears everything apart from the inside: humans, military equipment, fortifications of the enemy. The ODAB bomb can be dropped in all weathers from altitudes of 200-1,000 meters at speeds of 500-1,100 kilometres per hour.

Russian specialists believe that the ODAB bomb can replace a number of previously created low-power nuclear weapons. The United States adheres to a similar position, as far as this type of weapons is concerned.

Russia also continues working on the state-of-the-art hypersonic Zircon missile. The missile is said to become the main strike force of the Russian navy. The production of the new missile is said to be launched in 2018. The new missile will be able to destroy a state-of-the-art US aircraft carrier with one blow. The speed of the missile will reach 7.4 thousand kilometres per hour. In two and a half minutes, the missile will overcome distances of up to 250 kilometres. No air defence system in the world can intercept such a fast missile.

"The test has confirmed that the speed of the missile reaches 8 Mach (the number indicating the dependence of the speed of sound on the flight altitude)," a source in theRussian defence industry told the agency.